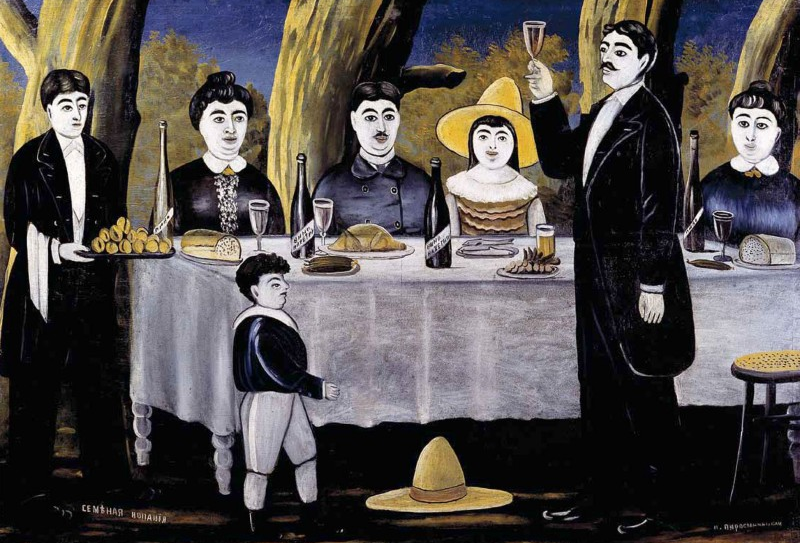 It starts with a pregnancy test.

For Poppy Morgan, a 39-year-old San Franciscan, that plus sign in the view window was an answer to a decades’ old wish. As a journalist, Poppy’s prayers and journey were exactly what I was interested in; I was writing an article on pregnancies like hers and had interviewed another couple about their experience.

So it was that I would spend the next two years writing the Morgans’ story, and, eventually, deciding what my own story would be.

The first thing I always asked women when I interviewed them about pregnancy was, “Did you always want to have a baby?”

As a child growing up in the Chicago suburbs, Poppy told me she would put the silverware away in the drawer like a mama tucking her babies in to sleep, wishing them all sweet dreams.

Involuntarily, my heart responded. As a child in Southern California, I kissed all my stuffed animals, mostly teddy bears and a fleet of dolls, before I went to bed. I learned to french braid on the yellow yarn hair of one doll, the braid revealing the cool, hard plastic scalp where the manufacturer hadn’t bothered to stitch hair. When I was old enough, I babysat. I got on the ground and rolled around with the twins, Glenn and Grant, and their sister, Lacey. We devised elaborate dream worlds. I would read to them in funny voices until their droopy eyes closed.

Growing up, there were two things my mother always told me: I would be a writer, and I would be a great mother.

On the surface, Poppy’s journey to pregnancy isn’t so different from other women who struggle with infertility: carefully timed sex, repeated tests, number crunching and sperm donor catalogs. The brittle nerves. The marital breakdown. Sometimes, the pain of not being pregnant was so intense, it felt like physical agony to Poppy. This was, selfishly, exactly what I wanted to hear about. Poppy’s experience would speak to a familiar ache in many women’s lives, yet her infertility wasn’t a biological problem. The Morgans’ problem was virological. Poppy’s husband, who I call Ted, has HIV. Poppy does not.

Before the mid 2000s, natural conception between someone with HIV and someone without it seemed scientifically foolhardy. HIV-positive women asked doctors to perform abortions because their babies were sure to have the virus and may not live long, or their mothers might die of AIDS in the baby’s infancy. It was a heartbreaking experience for the doctors I’ve talked to, and of course for the women as well.

But science has changed this. HIV medications now are powerful enough to diminish the amount of virus in the blood to undetectable levels. Today, if you compare Poppy’s blood against her husbands, it will look nearly identical. No virus. It’s not a cure, but it is a promise of a rich, full life—one that can reasonably include children.

This is one of the reasons advances in HIV care matter. I followed both Poppy and Ted, and another couple, Susan and Dan Hartmann, through their pregnancy journeys. In each couple, the man has HIV. Both couples had unprotected sex to conceive. It took Poppy more than a decade, but she got pregnant, and no one got HIV. Today, Poppy and her daughter, nicknamed Pom-Pom, are both still HIV negative.

A lot of what Poppy and I ended up talking about wasn’t sex, but money. Like most people for whom “natural” pregnancy wasn’t an option, the alternatives were costly: intrauterine insemination or in vitro fertilization.  Since a California law prohibited HIV-positive men from donating sperm, even if it was to be used for their own wives, and even if it were “cleaned” of HIV, they couldn’t use this procedure in their home state, so their insurer wouldn’t cover it. They’d have to pay out of pocket and it could cost $10,000 for a single shot—a 20 percent chance—at conception.

This kind of money anxiety resonated with me. At 38, I remember thinking, “I live in San Francisco. If I really want to have a baby, I can just do it. Nothing is stopping me.” I have three single friends who got pregnant using donor sperm. They tell me they never regretted it. Their Facebook feeds are awash in pictures of smiling children.

An image flashed in my head of my nephew at age 1, staggering into my parents’ kitchen the way toddlers do, his little face splitting into a giant toothless grin when he saw me. He’d identified me as his. My heart bloomed. I thought, “If that is a fraction of what I’ll feel with my own child, I need to do it.”

But there was the money issue. Children are expensive, and not one my life was set up for. I’d have to move from my apartment shared with a roommate, and probably to a cheaper city.  And of course, I’d have to get a full time job—one with benefits and maternity leave. Maybe in PR or marketing, I thought—there’s more money in that.

At 38, I’d been a journalist for 15 years. I was in the middle of a fellowship project on healthcare for undocumented immigrants. I’d recently traveled to San Antonio, where I rode through neighborhoods with the Brown Berets, and talked to undocumented children about home-grown cures in lieu of medical care. I interviewed nurse practitioners at charity care clinics who treated the poorest people in the city. I had rarely felt more in my center. I was so moved by the stories I heard, by the generosity of people who had no reason to trust me, let alone tell me their stories.

And I thought of the beautiful, heartbreaking stories Poppy told me, about all her efforts to have a child, how she’d been rebuffed and disappointed at every turn, and how she had physically ached to have a child. I wondered: Could I have a life where I wasn’t trusted to hear these stories? As I started to imagine giving this up, a weight settled on my shoulders. Give up the career I love for the baby I knew I would cherish? It was an impossible choice.

Poppy met her husband on her second day in San Francisco. On her first day on the job, as she walked up to her new office building, Ted held the door open for her. “I was looking into his amazing blue eyes and I remember thinking, ‘This is the guy,’” she told me. “I just knew it from the moment I met him.”

As a journalist, I’m trained to doubt such stories. It was too good to be true. But it checked out, and the Morgans’ romance became as much a part of the story as the desire for pregnancy. When the couple discovered that Poppy could take Truvada, an HIV drug, which would prevent her from getting HIV during unprotected sex, the pair talked about with how to protect her, while showing their love, physically and emotionally.

And they struggled. They didn’t get pregnant right away. They grew estranged, and at one point, Ted moved out. It broke my heart. It seemed, at that point, that Poppy might lose both the baby she dreamed of and the man she loved.

Meanwhile, at 38, I was dating regularly—mostly men but a few women, too. I knew that if I had a child, I wouldn’t date for a while, and I would be happy to do it. But sometimes, after weeks of no physical contact—not only sex, but no hugs or cuddling or kisses—my body physically hurt. I couldn’t imagine giving that up for years.

I remembered Poppy’s description of aching at not having a child. It wasn’t one moment of clarity, but as I weighed my options over many months, the realization dawned on me.  I knew that if I had to choose—and it wasn’t clear I would have to, since I wasn’t quite out of time—I would choose the relationship first. I wanted a child, but I wanted a relationship more. 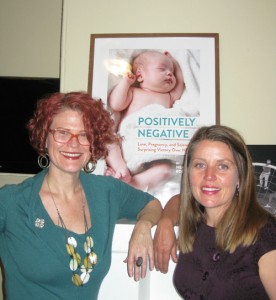 The author and Shannon Weber at the book reading.

In June this year, I turned 40. In July, I published the book that had led me to Poppy in the first place. I did a book reading in the home of Shannon Weber, a social worker who first introduced me to Poppy. For the event, I had the book’s cover, showing a baby swaddled in a blanket, blown up to 11 by 17 inches and framed. I stood in front it and read from the book to a packed room of HIV activists, friends, researchers—and Poppy.

I was so, so happy, fulfilled, even. I was where I was supposed to be. I joked that this was my baby, and gestured to the baby on the book’s cover. I still don’t know if I’ll be a mom. But now, I feel certain I’ll be fine whether I do or not.

Heather Boerner is an award-winning independent journalist and the author of “Positively Negative.”