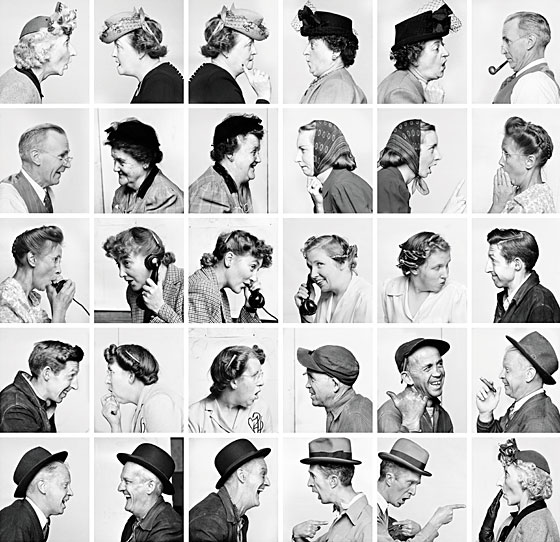 Wouldn’t it be nice if someone could just tell us what to do when we have important questions about our lives? Surely everyone has fantasized about this, and surely that desire is part of what drives a persistent love of advice columns. From Dear Abby to Dear Sugar, advice from strangers has been a social constant for a long time.

Today’s guest was an actual anonymous advice columnist. Andy wrote a column called “Ask Edna” for eleven years, from 1996 to 2007, where he fielded all kinds of questions (many of them about office romance, ahem). This interview has been edited for clarity.

Tell me about Ask Edna.

My advice column, “Ask Edna,” was written for Wunderman/Y&R for 11 years. The last two of those years, it went global across the agency intranet.

My identity was anonymous the entire time. I chose the pseudonym “Edna” because my name is Andy, and “Andy” spelled backwards is “Edna”….well, almost! LOL.

How did the column start?

I was already the editor-in-chief of the agency newsletter, which largely consisted of corporate articles on best practices and interviews with both agency leadership and the rank and file. I wanted to have a fun column alongside these more expected items.

The advice column caught on and became quite popular — even the global CEO became a fan of Edna. Eventually, I had to collaborate with HR and my column was vetted by the agency’s legal team to make sure I was in keeping with corporate “political correctness.”

Was it hard to keep your identity a secret?

Because questions were submitted to an email address that was not mine (as well as questions submitted into an anonymous box) my identity was for the most part protected.

Once in awhile, someone said something to insinuate that they thought I might be Edna. But it was usually someone who knew me very well, and someone who could recognize the 1930s phraseology that I would sometimes affect in humor.

What sorts of questions did people ask?

I got questions on just about everything related to working at the agency — from pay raises, to disruptive coworkers and nasty bosses. But mostly, people asked me questions related to office romance. 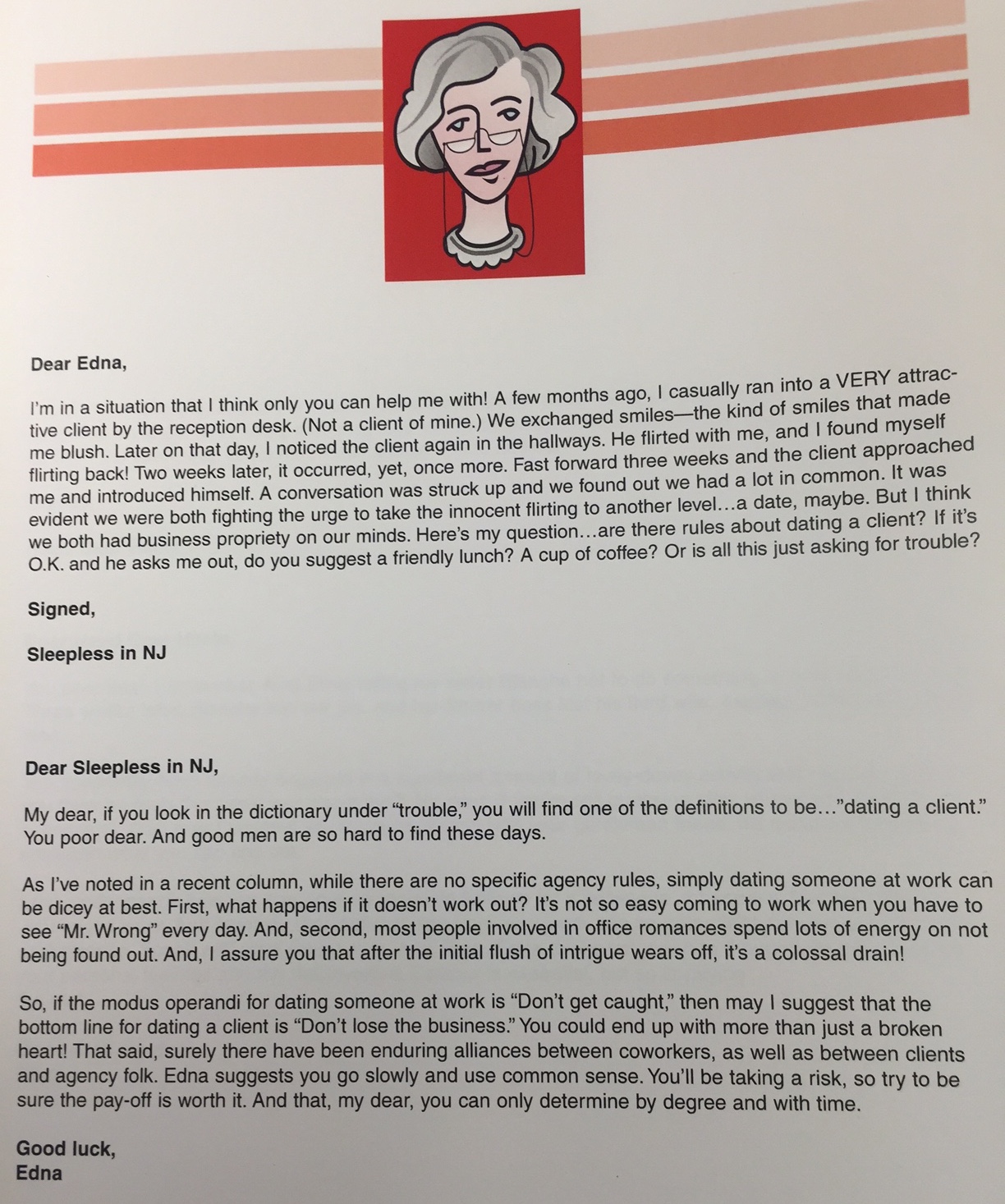 Were you surprised that was the most common topic?

I assumed there would be questions related to pay raises, career path choices, getting ahead, etc. It did surprise me, though, that a fair share of the questions pertained to office romance. But when you realize that the majority of people working in advertising are 20-somethings and 30-somethings, it isn’t really that surprising.  People at that age are at the peak of their mating “season.”

What was your attitude toward the people who wrote in? Did you sympathize with them? I can imagine some might seem sad or hopeless.

I was always sympathetic to people’s issues having written myself to Dear Abby and Ann Landers when I was a teenager.

Really! What did you write to them about — and did they ever answer?

Did you consider yourself qualified to dispense advice?

I felt reasonably qualified, inasmuch as I had been a deacon in the church visiting and listening to people’s problems and concerns all the time. For one year I went to seminary and was a chaplain intern in the cardiac care unit at Lenox Hill Hospital. And I had been in therapy longer than even Woody Allen, so I had an understanding of the therapeutic method.

Edna always used humor and made analogies to her vast past experiences with royalty, presidents, heads of states, celebs, etc. All articles ended by referring individuals to HR, or suggesting professional counsel, if they were not able to resolve their particular issues.

I loved being able to channel Edna. I would “become” her when I wrote my column.

I had a brief and minor career in theatre, and I had learned good technique in being able to transform myself into the character I was playing.

Did writing the column impact your feelings about your own life and choices?

Edna always used her (my) life experience, peppered with humor and basic common sense, to seriously answer all questions. Often I crystallized my own thinking about certain issues when answering someone’s question. And I enjoyed making people laugh, while at the same time offering sound advice.

As the person used to giving the advice, are you interested in other people’s opinions about your life?

Yes, I value other people’s advice or feedback on various topics. I take into account that each person speaks out of his or her own personal experience and worldview. I try to be  discerning…and, so, I take to heart what I feel is pertinent and leave the rest.

Why did you stop writing “Ask Edna”?

I left the company after 28 years, so there was no way to keep the column going. I bought the “rights” to Ask Edna for one dollar, just to keep it legal.

Do you have any general takeaways about human nature from your 11 years of fielding requests for advice?

I think that my main takeaway — whether it be in the Cardiac Care unit at Lenox Hill Hospital or around the water cooler at work — is that love is what matters in life. It’s certainly what people remember most at the end of their lives.

At my first job when I was 21 years old, I returned from a lunch break to find a note left on my desk. The note had been written to me by an older female coworker, named Catherine, and it simply said: “The lover is always the winner.”  I never asked Catherine why she wrote me the note, and she never offered any explanation, but I’ve lived by its philosophy all these years since. I believe the value of life is not measured in time, but in our ability to give, to receive, to feel love. It can be messy, and complicated, but, as my mother once told me, it’s what makes sense of being alive.

Image: Photographic studies for Norman Rockwell’s The Gossips, a painting originally published on the cover of The Saturday Evening Post in 1948.