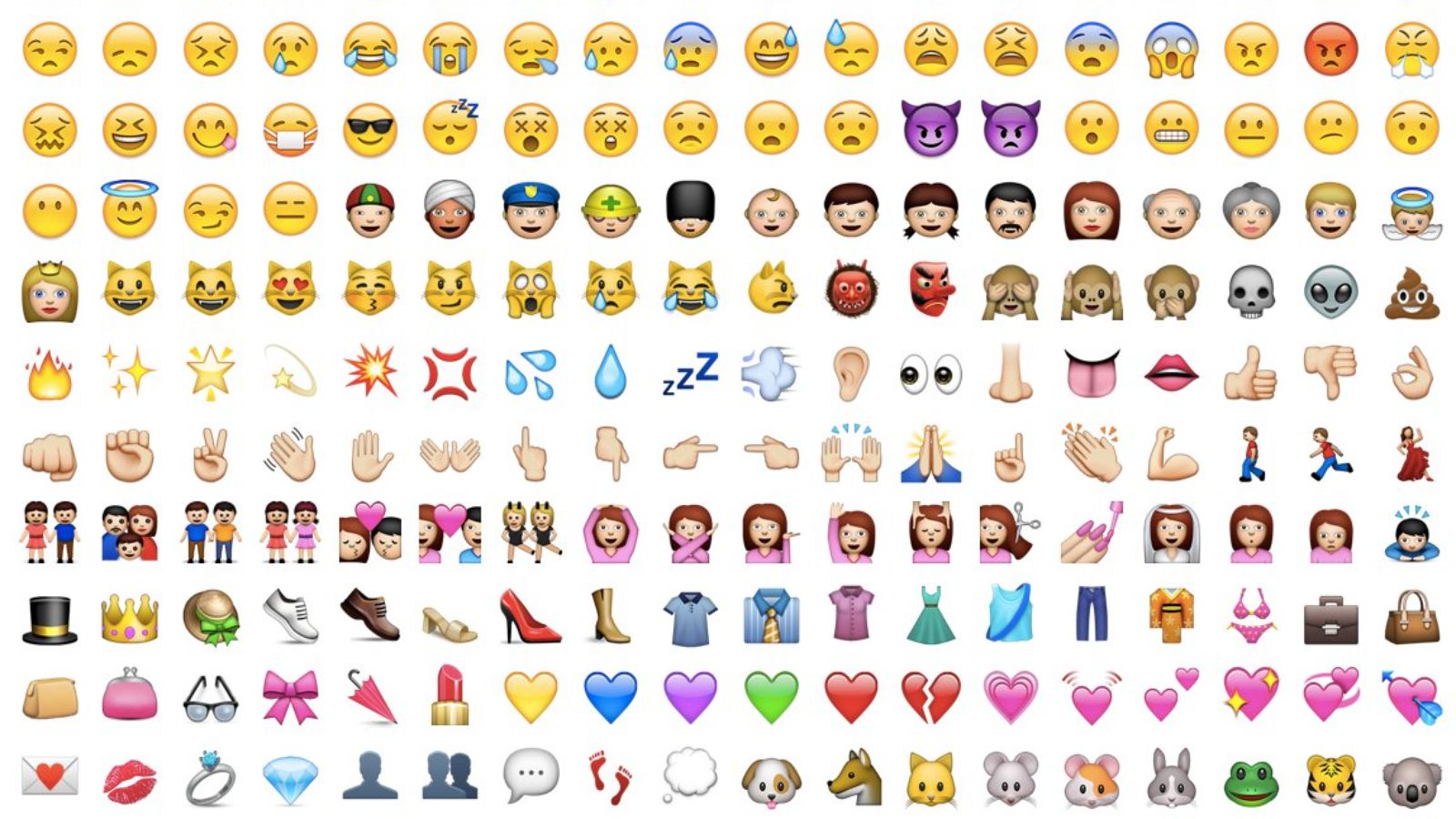 Last summer, I learned a secret to managing millennials. After years of pleading for better communication from them, I accidentally stumbled upon a language we have in common: emojis.

As the program director of a regional junior sailing program, I’ve been working with and managing college and high-school aged employees for over a decade. I oversee 40 sailing instructors and 20 sailing courses over ten intense summer weeks. I love the work, especially being a manager; I thrive on creating an environment that’s enjoyable for both our students and instructors alike.

As rewarding as management is, it can also be extremely challenging. Most of the people I supervise are in high school and college, and due to the nature of the work, we need to be in touch all day long, often by text. This is where communication began to break down in recent years. If I sent a text to an instructor asking them to do something and didn’t get a response, I had to assume the message had not been received. If it was something time-sensitive, it meant I had to send the text again. Or call. Or email. Or call the manager and ask for the message to be delivered in person. It was annoying and a big waste of time.

Communication is key for any organization, but the stakes are somewhat higher for the sailing program because it is very decentralized. We have three distinct sailing sites, over 40 employees, and thousands of students and customers. If the instructors and directors fail to communicate well, our delicate operation can fall apart quickly. In the best case scenario, this would mean angry parents and poorly run programming, and in the worst case scenario it could create dangerous conditions for anyone on the water. At our instructor orientation this past June, I decided to tackle the issue head on using a new approach.

I’d already found that texting was the most effective form of communication (these 18 to 22 year olds don’t like talking on the phone and don’t read email regularly). I decided to take it one step further and dispense with the need for text all together. An acceptable response to a text request would now include an emoji: 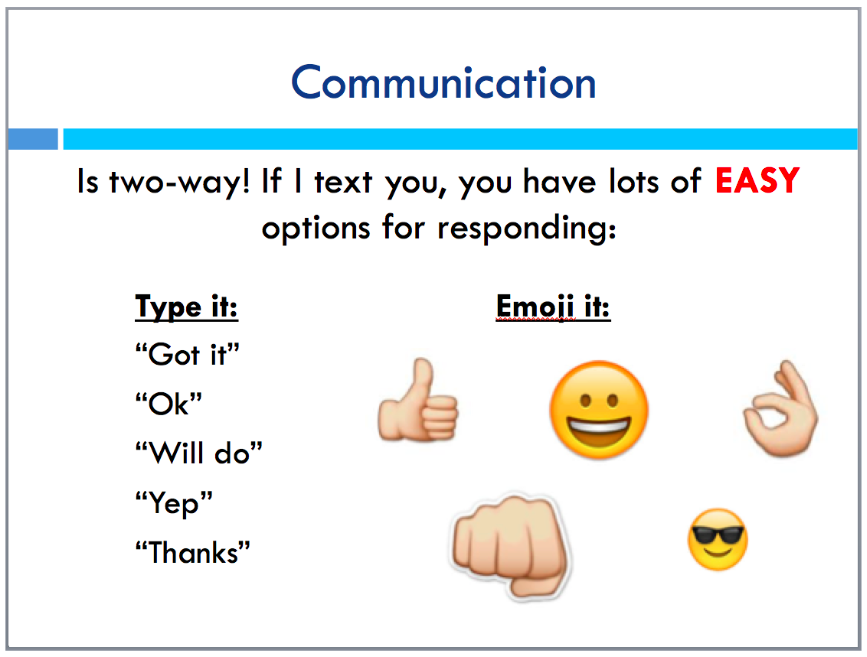 I was half-joking when I presented this slide! I didn’t realize that, in providing the option of communicating with emojis, I’d revolutionize communication between me and my staff in a very positive way.

It was shocking how quickly and thoroughly the change happened. By encouraging them to respond this way, it almost completely eliminated the communication problems of past summers. No more unacknowledged requests on their part – and therefore no more nagging on mine.

Texts became emoji-laden, no matter the subject. This is what a group text looked like by the close of our summer programs: 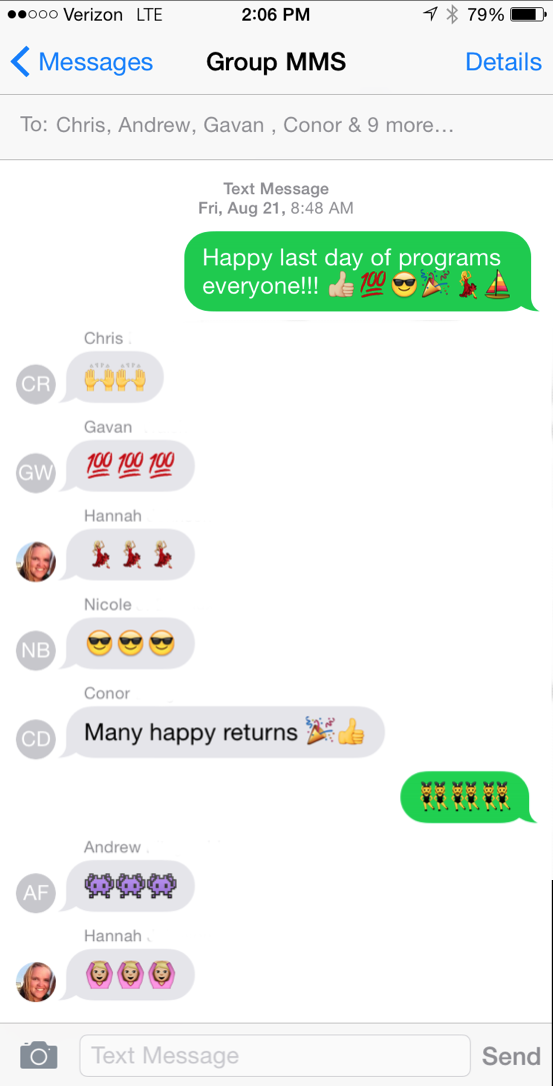 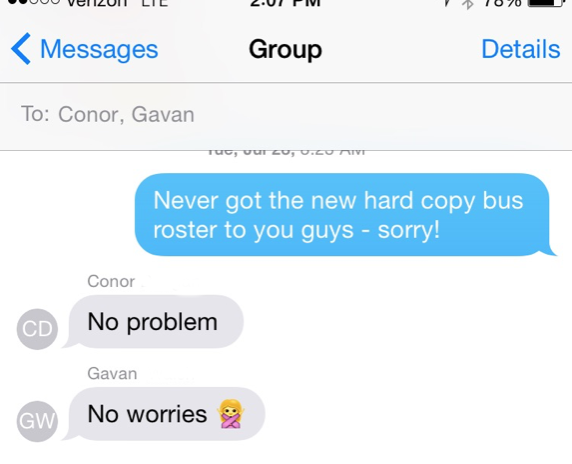 As we were all saying goodbye, it was an emoji free-for-all. 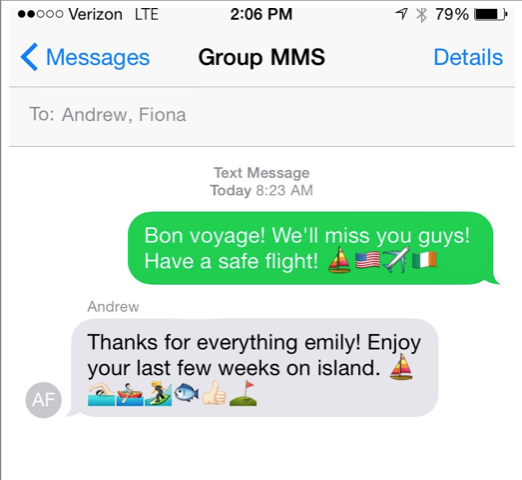 Beyond strict functionality, emojis became a really fun, happy and creative way to communicate. The staff seemed to enjoy it. Rather than seeing my requests only as a boss’s instructions, they became opportunities for friendly, silly, playful interactions. I’ll admit, sometimes I spent quite a bit of time selecting which emojis to send my employees!

When I was exit-interviewing one of my instructors he said, “At home, in Ireland, I could never imagine corresponding with our Program Director with emojis!” I took it as a compliment.

Effective management, I think, has a lot to do with how you relate to the people you’re managing. Knowing what makes them tick – what they value, how they prefer to communicate – is what’s going to keep your organization running smoothly. I try to think about what my employees might want to get out of their work experience each summer (not just what I want to get out of them). All of this is constantly driving me to think about our relationship. And, sometimes that can be as simple as evaluating the use of cartoons over SMS!

So, if you need a quick, effective way to communicate with a co-worker, try just sending a string of emojis. It might brighten their day and bring energy to the conversation (especially if they’re under the age of 25).