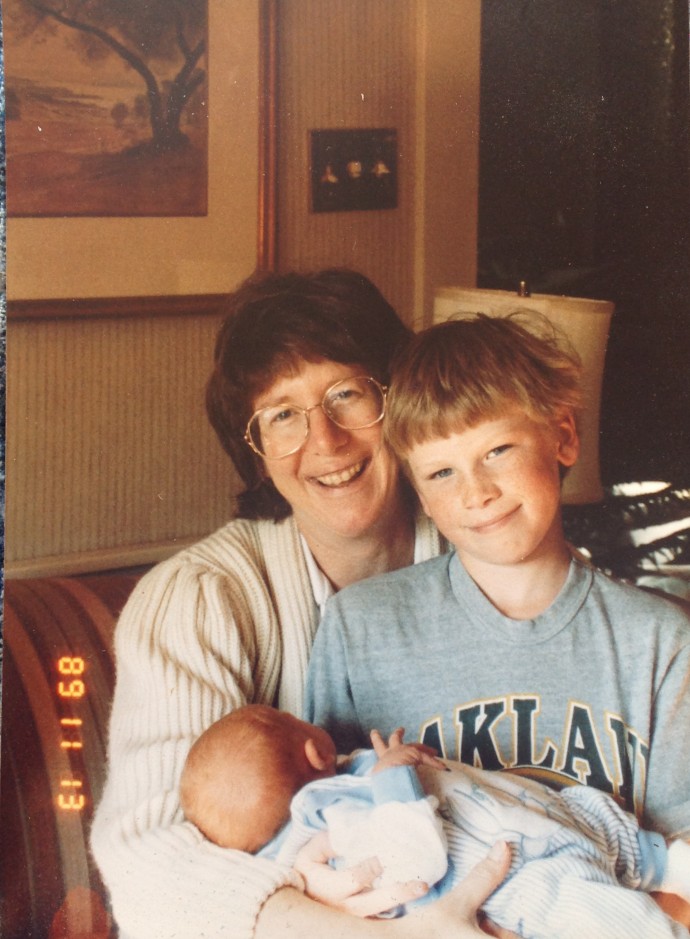 I have been practicing as a lawyer for 40 years and am now basically in the final stages of that practice, i.e. retirement. Recently, a dear friend of mine sent me a news article that discussed the attrition of women from the workplace when they become mothers. The women cited in the article were leaving jobs they had worked hard to get because they felt they couldn’t balance career demands with family. I was distressed to read this – I fervently hope that women do not feel the need to leave their careers because of the challenges of working while having a family. As I look back on my career, during which I had two sons, I realize how key my profession was to my quality of life. I can say without hesitation that I have never regretted being a working mother.

As a young woman, I questioned whether or not I wanted children, but not because of how I would manage balancing motherhood with work. I was just never someone who was very interested in babies. However, around age 30 my biological clock did begin ticking, and I suddenly thought having a child would be a good idea. My parents had given up on our having kids since my husband and I had already been married for eight years by that time. When we called them on Mother’s Day and chorused “Happy Grandmother’s Day,” there was a dead silence, and then my mother said:  “Oh, is one of the cats going to have kittens?” They were overjoyed when we explained that we were expecting, and my mother called back fifteen minutes later to be sure she had heard the news correctly! I was 32 when my older son, Andrew, was born, and I was 41 when my younger son, John, was born. Despite my earlier uncertainties, I loved being a mother.

I also loved my work as a lawyer. Right out of law school, I clerked for two years (from 1973 to 1975) for the Federal District Court for the Northern District of California. I was the first woman law clerk that my judge had hired after 23 years on the bench; one reason that he was incented to hire me was that his daughter was just starting law school. I then moved to a private firm to do antitrust law. At that time, the firm was not friendly to women in litigation in general, and certainly not to women lawyers with families. The senior woman partner at that time basically told the younger women coming in that they would have to choose between work and family. I felt fortunate that my supervising (male) partner was a wonderful mentor who in fact encouraged me to develop my own style and not be bludgeoned into changing it to fit a more “male” profile.

Still, there was an overall prejudice against women in the firm. During my first year at the firm, my husband was out of the country for a good deal of the time, so I had nothing to do but work. I worked hard, usually leaving about 6 or 6:30 pm, and I never had any problem in getting my assignments completed on time. But unlike most of the young male associates, I did not linger about until after 6pm, have dinner on the firm, and then “work” some more. What I thought was perfectly reasonable conduct had repercussions: during my first year review, much to my astonishment, I was told that my work was good but that I didn’t seem entirely committed or devoted to the firm!

Despite these issues, I gained wonderful experience at the firm, and, equally importantly, my partner there was instrumental in getting me my next position; the “old boy” network, in this case, operated to help a woman get a job.  So, four years later, I moved to a transportation company as their in-house antitrust counsel. The company had only very recently hired women lawyers, and I was the first woman in management to have a baby; the company had no maternity plan at the time, and we simply winged it. The great advantage of being in-house at that time was that the hours were very reasonable: everyone, including the lawyers, left at 5pm on the dot. I ended up spending most of my career as  in-house counsel in a corporate law department, and this was a very good way to combine work and family. I was able to attend virtually every school event for both my children, participate in field trips, and be a room parent without feeling that I had to sneak away to these events. The basic rule was that if you got your work done, being away from the office occasionally was acceptable. I was fortunate in that I almost always had weekends free. 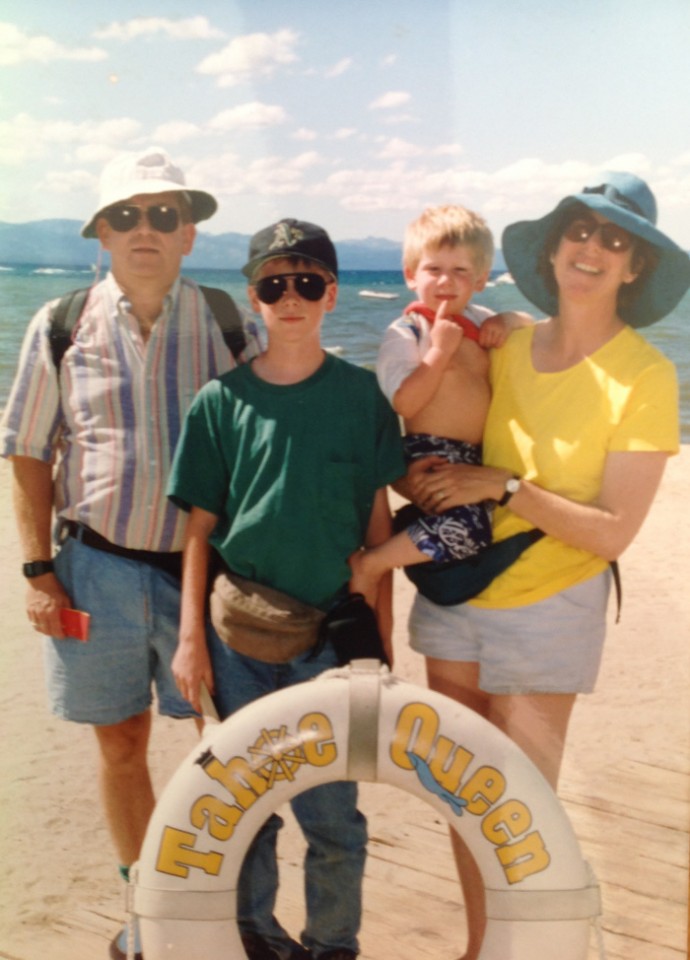 Ann with her husband and two sons.

I kept a bright line between work and home. I did work at work only. I did not give out my cell phone number or allow people from work to call me at home. I was quite rigid about this separation, often to the annoyance of my colleagues, although they got used to it and eventually accepted my choice. I think this line made a huge difference to our family life. It certainly allowed me to enjoy my children and their friends without tension or guilt.

There were other factors that allowed me to balance work demands with family time. Quality childcare is key, and I was very lucky that way. My husband and I were able to share a child care person with another family and therefore we could both work full time while also keeping our sons at home before they went to preschool. Of course, having quality childcare shouldn’t be a matter of luck; it should be available to all. Structural changes need to occur on that front. And yes, husbands/fathers should share in parenting and household duties, they as often do nowadays. But does it have to be 50-50? Is that essential in order to combine work and family? I would say that, desirable though an equal split might be, a more skewed arrangement between the spouses, with the woman taking the greater share, should not in and of itself stop a woman from combining work and family. It may cause tension between the spouses, but that is a different matter.

Did working full time affect my ability to be the kind of parents my sons needed, and that I wanted to be? I don’t think so. I spent a great deal of time with my sons and never heard them indicate frustration, anger, or regret about my working; it was a given in their world. And, as I said, I was able to be at almost all school functions and other major events in their lives. I attended Little League practices and games, spent hours on the golf course with my younger son, helped with school projects, and spent many hours with each of them on homework and high school and college applications. 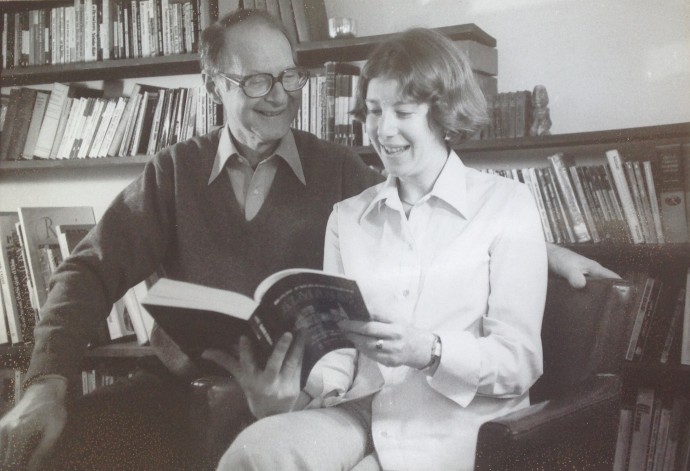 Ann and her father. Together they authored a book, “Mental Disabilities
and Criminal Responsibility.”

My work also enhanced my quality of life tremendously. It was intellectually stimulating; I loved research, writing briefs and motions, and understanding the world of business. I gained increased confidence as I began to master both the relevant areas of law and to really know the industry I was in and to gain the respect and trust of my clients. Work provided me with an opportunity to interact with a diverse group of people, none of whom I would have met but for the job. My job also allowed me to work with other lawyers, brainstorming and learning from them. Equally important, I enjoyed being able to support my family. I have a real sense of why men like to be breadwinners; one can take great pride from that role. I wanted to set an example for my children, especially since they were male children, to show them that women are able to work professionally while still spending plenty of time with their families. I can say in all honesty that I believe that my sons have taken something centrally important from my being a working mother: I believe it is a given for each of them that they expect that their partners will be people who have their own careers and interests and that part of the relationship will be balancing the professional needs of each other.

Here’s the thing that worries me: my generation of women lawyers worked hard to be able to enter the practice of law fully. My friend’s son was famously asked when he was four whether he wanted to be a lawyer when he grew up, to which he responded, “ I thought all lawyers are women!” But he was in the rare position of being surrounded by female lawyers because of his mom and our friends. The change from the time I clerked in federal court, at the beginning of my career, and saw a total of ten women lawyers to now, when a courtroom could very well have a woman judge, bailiff, and lawyers, is huge.

The atmosphere has changed radically as well. When I began in the transportation industry, I was usually the only woman present, and I, like many women of my era, had to deal with crude jokes and crude language; part of that was due to the fact that the men were unused to working with women as equals and certainly were unused to taking advice from women. But all of that has disappeared; a new generation of men has been trained, whether officially or unofficially, to treat a meeting as a place where people are civil to each other, respect each other, and where women and men are on an equal footing. I am absolutely of the view that “equal” is not necessarily the goal – being “equal” to the way the men operated in those days was something that we realized was not a valid or valuable goal. But I just hate reading or hearing that young women today feel they must choose between a legal career – or any career – and having children. That takes us backwards, and I find that sad.

I have loved working as a lawyer, I have loved being a mother, and I have not found those two things to be incompatible. I never questioned – or regretted – my choice to be a full time working mother. It always seemed the right thing to me and for me. I loved what I did, and I think that made me a more interesting person for my children and my spouse. And I hope fervently that young women today who wish to combine these two things can find the combination of jobs, support, and determination to enable them to do so.

All images are from the author’s personal collection