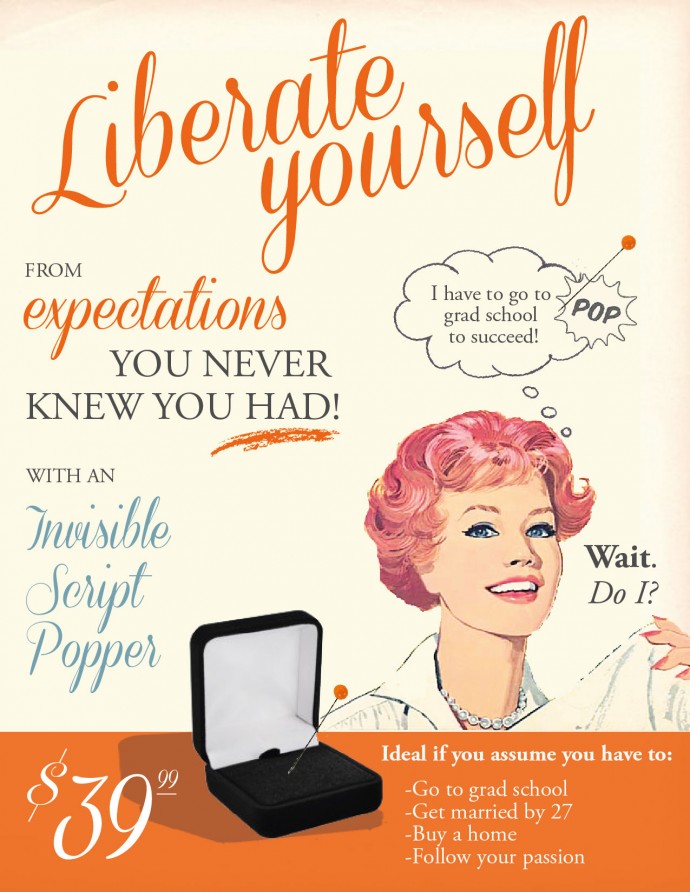 An invisible script is an assumption that is so baked in to how you view the world and your choices that you don’t even question it. It often involves an inner voice telling you what you should do, need to do, or can’t do.

Here are some common invisible scripts we can think of off the top of our heads:

When you identify an invisible script that guides your life – but that actually isn’t true – it’s extraordinarily freeing. It can also feel unsettling and scary to upend doctrines you took for granted.

Ramit Sethi, the author of I Will Teach You To Be Rich, introduced us to the concept of invisible scripts several years ago when he shared some of the ones that are most common to Indian and Indian-American families on his blog. Scan the 213 comments responding to that post if you want to read a bunch more that were submitted by readers – they are pretty fascinating and will probably feel very familiar.

There are general scripts that a lot of people share, like the ones we listed above. They can also be more specific. Whether general or specific, invisible scripts always, always feel personal. For example, I live 3,000 miles away from my family. I’m very happy living where I do, and I’m very close to my family. I talk to them all frequently by phone and see them several times a year, but I still struggle with an invisible script that says that good children don’t go so far away. Invisible scripts aren’t easy to shake; identifying them doesn’t necessarily make them disappear. The value is in freeing ourselves, even for a moment, to think about how things could be different, to consider the consequences of deviating from our own assumptions.

My brother, who is a journalist, has a piece of paper taped to his computer monitor at work. It says, “Always check every fact you THINK you know.” I think about that dictum all the time. Invisible scripts don’t generally revolve around facts – they cannot be confirmed or denied – but they can be examined all the same. Do I know what I think I do? Invisible scripts are difficult to identify precisely because they are so ingrained in the way we organize the world and the decisions we allow ourselves to make (or even consider). This is the same reason why it’s so important to question them.

With all this in mind, we wanted to create a funny and gently provocative way to share the concept of invisible scripts, to encourage people to think of the ones that shape their lives and, of course to question them. Are they true? Are they helpful?  The satisfaction of recognizing an invisible script and realizing that you don’t need to be bound by it really does have the satisfaction of popping a balloon. The poster we created is a joke, of course — and if there were such a thing as an invisible script popper, we would sell it for way more than thirty-nine bucks.