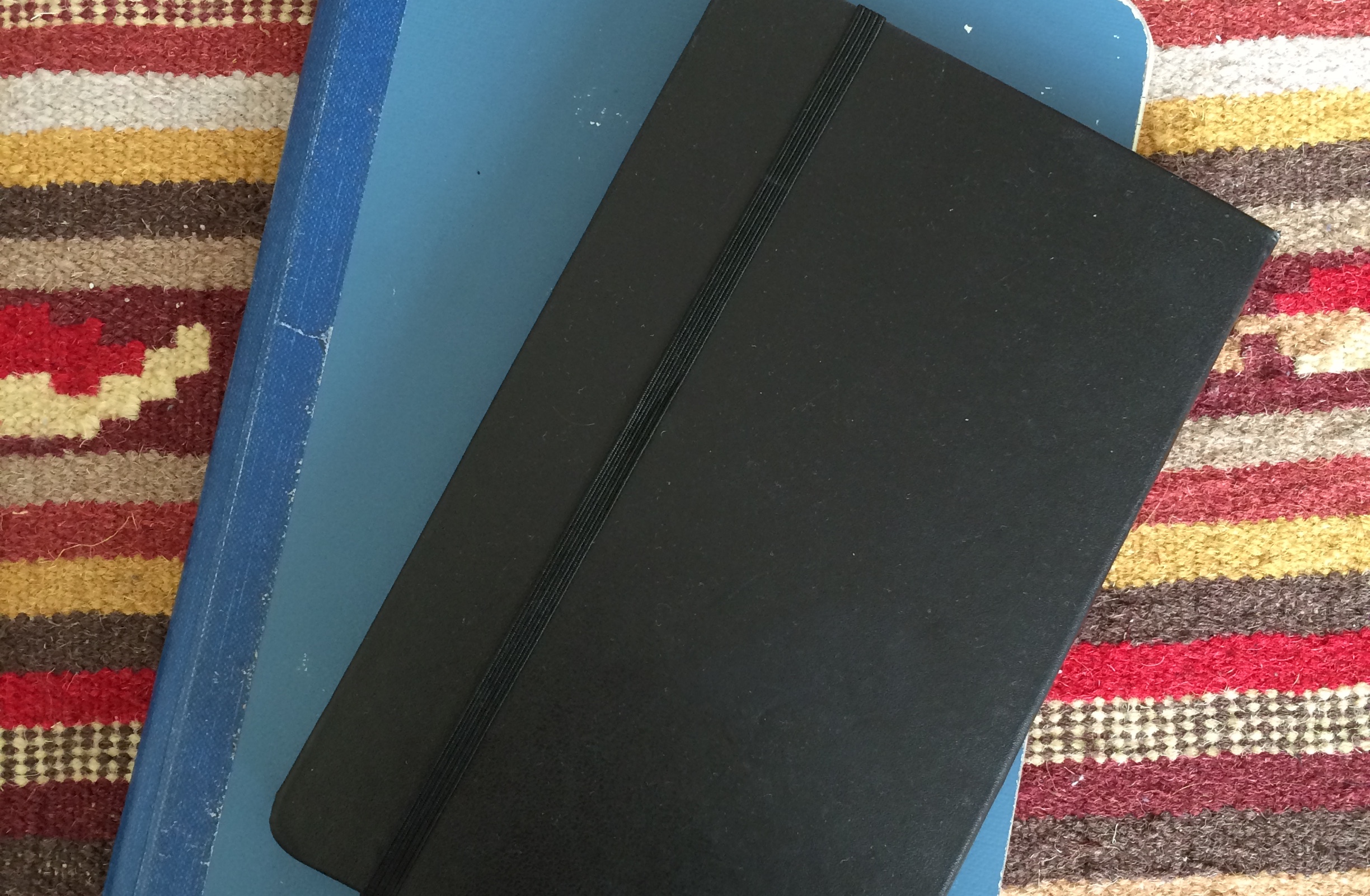 I’ve started rereading my journals by looking for today’s date one year ago, two years ago, even three, four years ago.  This means I’ve been keeping a journal, sporadically, for a long time now.  (This might also mean that I think I’m pretty interesting).

When I first moved to San Francisco three years ago, I wrote a lot about moving, about writing in coffee shops, and the sounds of this fogged and hilled and palm-shaded city, and how they differed from the sounds of New York.  My journal was a notebook, like what you might buy in the hot still days of August, before school started, along with a pencil case and some new gel pens.  I guess, after all, that I’m in the freshman year of life. (Me, September 2012).

I also wrote a lot about work (or lack thereof).

Just got lunch with Anu.  Had a phone interview earlier.  Have gotten to a point where I really can’t image anyone hiring me.  I want to start asking about waitress jobs (like at the place I’m at now) but that’s too intimidating.  Face-to-face rejection instead of over the phone.   (September 2012).

I was in a new city, with a new apartment and some old friends.  They all had jobs.  I walked around a lot, cooked a little. I tried to write. I took a taxi to buy a used Ikea bureau from Craigslist and emailed companies to see if they wanted to hire a recent graduate with a recently embellished resume.

Walking down Mission Street at dusk: palm trees shaking in the breeze coming in off the bay and the wail of Bart floating up through the grates in the road.  Buses sighing into stops, a flower shop that was always empty, carts full of fruit rolled into stores and locked up for the night.  What am I doing out here?  (September 2012).

It felt like an eternity, this transition period. But my journal entries prove that it was only three weeks of cold-emailing, walking through new neighborhoods, and drinking morning coffees and afternoon teas in minimalist cafes in the Mission.   Looking back on it now I think “Three weeks of nothing?  Sign me up!”  But then I remember, so well, the feeling of waking up every morning with nothing to do.  Like when I went to summer camp in Wisconsin and was so homesick: rain on the roof of the tent, cold cream-of-wheat for breakfast, and a full day stretching out in front of me with nothing to do and nothing to look forward to except, maybe, being able to cross off one more day till my parents drove up the driveway and came to take me home.

Then I got a job.  Or actually,  a paid internship.

Got a job! Found out this morning.  Interviewed on the phone Tuesday, in person on Thursday, start on Monday.  Am now terrified of having job. About being bad at work, about working too hard to do anything else, etc. etc. etc.  (October, 2012). 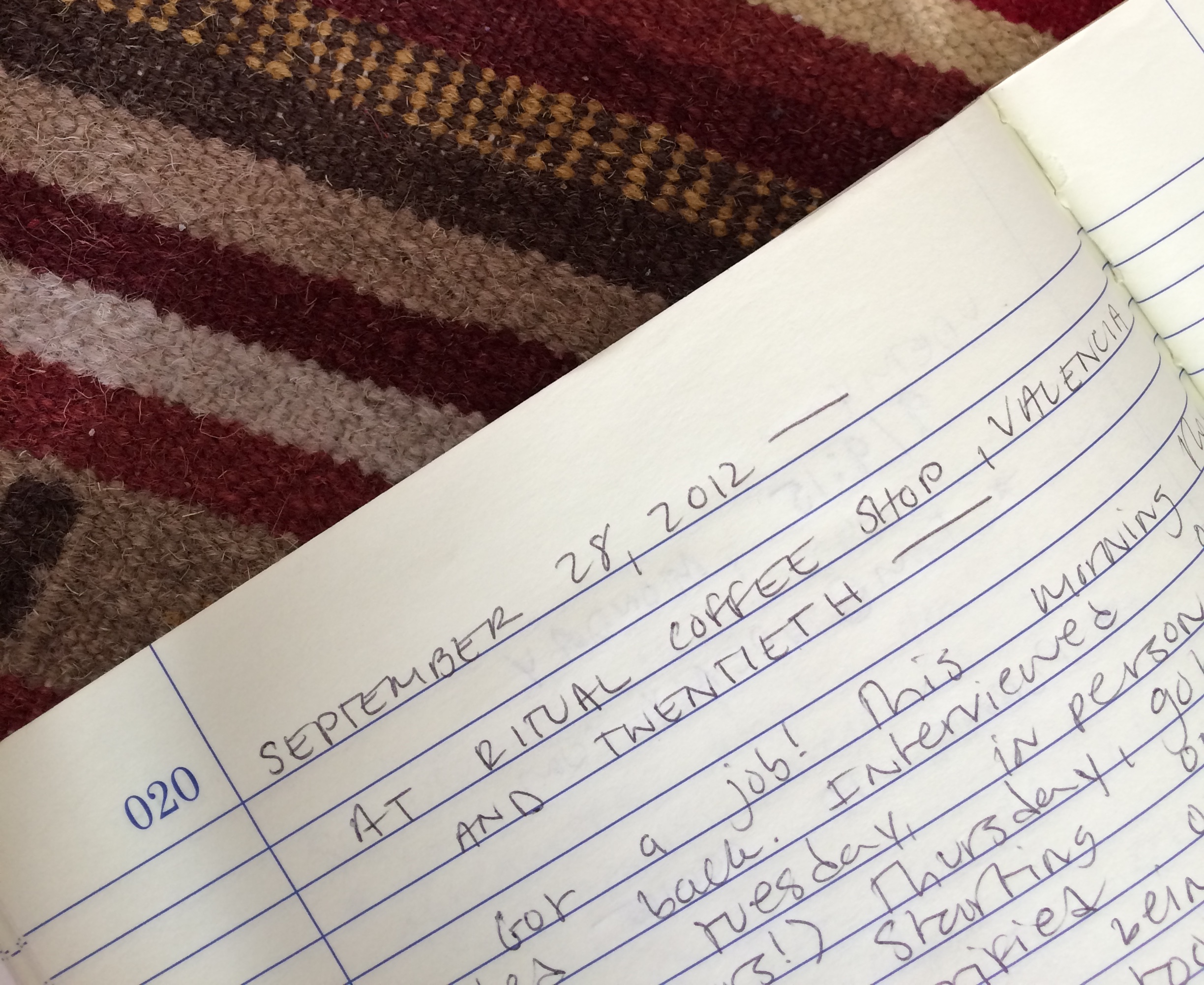 I think back now to that intern who started that Monday, who brought her own computer just in case, who picked out a first-day-of-work outfit: how happy she was  when a guy named Jim said “Want to come to Lee’s Deli with us?” and how confusing it was when 5pm, 6pm, and incredibly, 6:30pm rolled around and no one left the office.  (When do people leave?  I literally cannot tell.  I’ve started to leave at 6 and if I get fired, I’ll deal with it: late October, 2012).

At work I had two bosses.  One was my boss, and one was my boss’s boss.  One boss said: “Generally, it’s not great to ask questions.  You can figure things out better on your own.” (I am anxious. I am scared. November, 2012)

My boss’s boss said: “This data is totally incorrect.  You need to figure out how to do this correctly on your own.” (What is the point of this job?! It is stressful, and seems stupid, and is not what I want to DO: November, 2012).

I spent a long time not asking questions.  I would ask my parents questions, or my friends, or, once in awhile, my peers at work.  I would never ask my bosses questions.  I was very unhappy.  I didn’t know how to do anything!  I got in fights with my parents.  All my journal entries are boring to read, now.  Over and over a litany of I’m stressed, in many different words.

One day all of the men left their desks at 4pm.  They started emerging from the bathroom and from back conference rooms in sweatpants, sweatshirts, jerseys.  There was a rush of rustling as they zipped up computers, packed up knapsacks.  “Where are you guys going?” I asked.  Some people mumbled.  No one answered.  More men emerged, one carrying a basketball.  “Are you all going to play basketball?” I asked.  A mumbled “Yeah” and then they all hurried out.

I found out, the next day, that someone had sent an email to all of the men at the company inviting them to play.  They had gone through the all of the names of every employee, and typed out every man’s name.  Our company has an “@all” email list.  One click, one email, everyone invited.  This other way must have taken 12 minutes.  I like basketball!  (late November, 2012).  I would have played.  And even if I didn’t want to play, I definitely wanted to have been invited, included, made to feel “part of the team”.

Then finally, one day, I started asking questions.  Everyone responded.  Everyone was nice.  The answers were helpful.  Work started, slowly, to get more familiar. The fall turned into the winter, and the clocks moved back and San Francisco entered another year of drought when the rains didn’t come.  But time moved forward.

In December I got a full time job: good bye internship, hello salary. This is Life.  I am Solidly In It.  And I seem to be doing Pretty Well! (December, 2012).

You can tell by my capital letters how emphatic I felt these accomplishments, and how happy.

As 2012 slipped into 2013, it started to become routine.  I started feeling settled, comfortable. California.  Work.  Having an apartment, and a schedule, and a new city, and a new life.  San Francisco stopped being something I was forcing myself to do, and started being something I was happy about.   I wrote about how Bart trains rush, so politely, into stations, and how the recordings on the Muni said “Please” and how about every day, recently, smelled like spring.  I made lists about things I liked at work:

The last entry in that particular notebook, actually, is a list of things to do for work.  I switched, afterwards, to a regular black Moleskine notebook.  As spring became summer, I left the freshman year of life, and dropped the school notebook along with it.