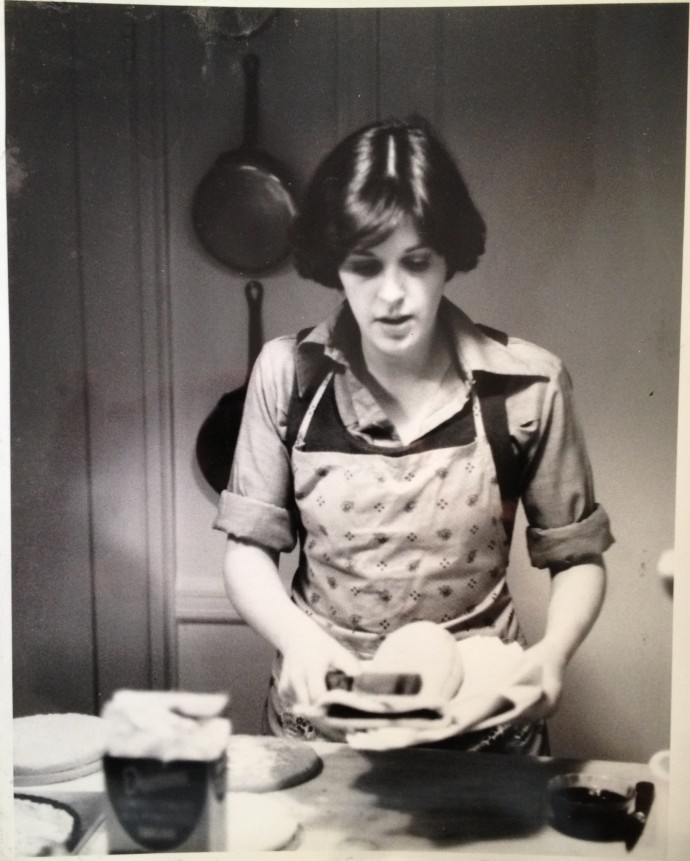 I’ve always considered myself a shy and retiring person. I’m a rule follower, unobtrusive, hate to make a nuisance. I never considered myself successful or expert in anything. I just turned 68, though, and as I look back on my career as a professional chef and author, I can finally see all the things that I’ve accomplished, and I’m shocked and impressed when I think of the ways my ambition motivated me and made me courageous.

I’ve loved food – and eating – ever since I was a little girl. I spent much of my childhood in Antwerp. The most vivid early memory of food is not what I ate at home but when my uncle took my family out to dinner at a 3 star restaurant. I was 9 or 10 and I remember I had hare (rabbit) with two sauces: one cream and one dark; cranberries and a puree of chestnuts; a typical (then) fall menu. As a young woman I moved to New York and started cooking for myself, trying to replicate the food of my childhood. I was working as a school librarian, but I dreamt of a life in the kitchen.

In 1975, I read an article in the New York Times about the first woman chef at the Waldorf, Leslie Revsin (then Leslie Arp). She became my idol, and somehow – I no longer remember how – I got her phone number. I actually called her up out of the blue, introduced myself, and asked if we could meet. As I said, I think of myself as very shy, so this strikes me now as incredibly bold. Leslie was more than welcoming; she actually invited me to her house and we had a wonderful time talking, mostly about sexism in the restaurant and food industry. I was fascinated to hear her experiences. It was deeply inspiring, and a real turning point for me. I’d taken some at-home cooking classes, but had no formal training. I decided to go to a local culinary program. I was still working in the library, and the culinary classes started at 6am. I would take the subway to Brooklyn for class and then come back to my day job, which was in downtown Manhattan, from 1pm to 9pm.

After two years, I graduated and got my first job at a new restaurant called Ruskay’s cooking on Friday and Saturday nights. There was only one menu each week, and it cost $7.50 from appetizer to dessert. To my horror, I got a complaint from a customer about the food on my very first night. The manager told me not to worry about, but it shook my confidence. I kept at it, and I started getting a following, some of whom were famous – Michael Bennet (A Chorus Line), Perry Ellis, Peter Martin, Zero Mostel. At one point the restaurant was reviewed in the New York Times and given two stars. I was very happy with the review, but miffed because the reviewer kept referring to the chef as a “he.” Women chefs were a real rarity at that time. 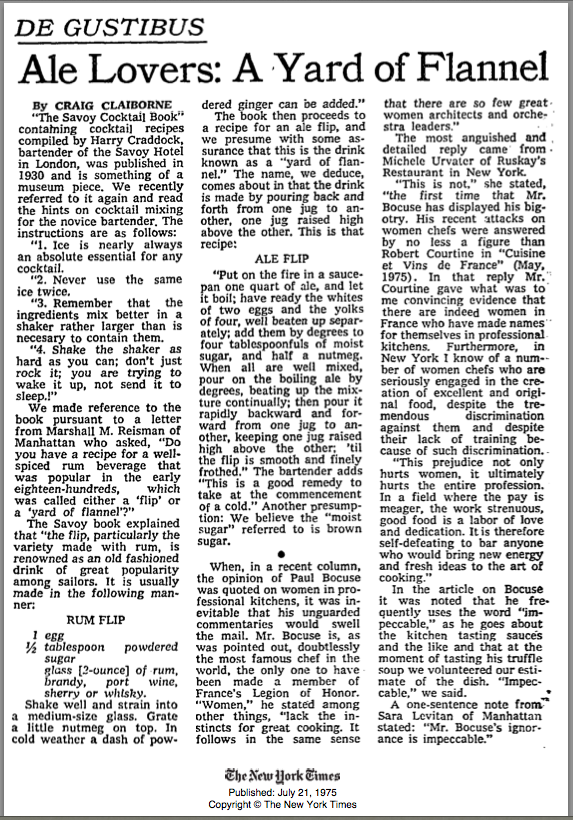 In 1975, I wrote in to the New York Times protesting how women chefs were characterized by famed chef Paul Bocuse as lacking the instincts for great cooking. Craig Claibourne quoted me in his article: “This is not the first time that Mr. Bocuse has displayed his bigotry… This prejudice not only hurts women, it ultimately hurts the entire profession. In a field where the pay is meager, the work strenuous, food is a labor of love and dedication. It is therefore self-defeating to bar anyone who would bring new energy and fresh ideas to the art of cooking.” Read above, the column all the way on the right, for the full quote.

For about ten months, I kept this up in addition to my day job at the school. Eventually, though, I became so overwhelmed that little things – such as accidentally locking myself out of my apartment one night – left me in tears. A few months after the keys incident was the fourth of July, and my husband and some friends came by to the restaurant to say goodbye to me before they left to go to the beach for the weekend. It was 102 degrees outside and the restaurant kitchen was possibly even hotter. I thought to myself, “what am I doing here?” Shortly after that, I quit.

I was thinking about starting a tiny restaurant out of my apartment but needed some advice on the decision, so I picked up a phone and made another call to a person I admired but had never met: Gael Greene, of New York magazine. Gael told me that it was not a good idea, and that if I needed to work out of my apartment, it would be better to start a catering business (which did not interest me). I also called James Beard to ask his advice. I don’t know where I got the courage to do that! I can’t remember exactly what he told me, only that it was curt.

I decided to offer a cooking class rather than open a restaurant. I had overheard that Mimi Sheraton, a prominent reviewer with The New York Times, was reviewing home cooking schools. Once I had a group of people signed up for the first class, I told them that Mimi Sheraton would be reviewing me. Now, this was not true at all and thinking back on it, I can’t believe I had the gall to tell people that she would be there! Frantic to try to make it so, I wrote to the New York Times submitting myself to be considered for a review. Partway through the eight-week course, unbelievably, she did show up! She observed the class for about two hours, and in the end she gave me an excellent review. 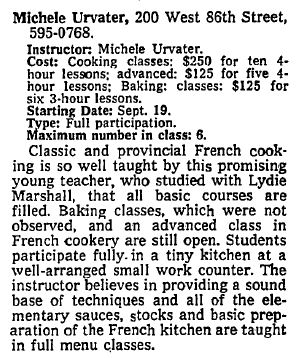 I was still looking for a real chef’s job, but being a woman was an incredible barrier. It was a deeply held belief that women could be home cooks, but not professionals. In part because of that prejudice, I became a corporate chef instead. I wrote an article for my college alumni magazine about how difficult I had found it to be a female chef. As a result of that article, I got an interview with Judith Jones, a senior editor at Knopf. Judith was Julia Child’s editor, so I decided to write to Julia Child, through Judith, about my experience being a professional female chef. I remember that Julia wrote me back a lovely note about not giving up and encouraging me to pursue it.

In 1979, I crossed paths with Julia again after the publication of my first cookbook (co-authored with David Liederman), Cooking the Nouvelle Cuisine in America (Workman). We had a tiny book tour, and David, who knew Julia Child more than me, wrote to her telling her that our tour was taking us through her town of Cambridge, MA. This was another mistruth – our book tour did not take us anywhere close! He asked if we could interview her. She said yes, and invited us for lunch. We brought a cake called Marjorlaine from our book. It was very intimidating and exciting. I felt so nervous about our fib, but it never came up, thank god.

For many years afterward, I bopped around between different jobs in the food world – from developing recipes and being a chef, to doing more corporate cooking gigs. I also developed another book, Monday-To-Friday Cookbook, which was for working parents. I’m a planner, plus both my husband and I worked full time, so this approach to cooking appealed to my natural instincts. To my genuine shock, the book was a big success. In 1991 I went on a 30 city tour. Perhaps best of all, the book won a James Beard award. 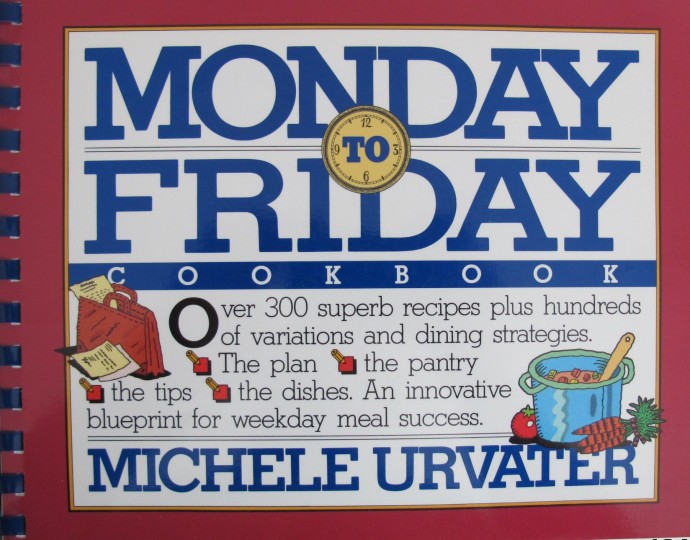 The original Monday-to-Friday Cookbook, which was published in 1991 (Workman).

In 1997 I interviewed for the then-fledgling Food Network, which was nothing like it is today. They had a show in mind about feeding your family on $99 a week, and that’s what I auditioned for. I knew from my book tour how important visuals were, so I brought a red enamel pot and blue arabia ware platters to my audition. They offered me the job, but since I don’t like drawing attention to myself, I was very nervous about appearing on camera. The producer, trying to put me at ease, told me that most people watch TV alone, and that when you look in to the camera, it’s like you’re talking to one person. I have to admit that it was exciting to be called “the talent” and to be part of a burgeoning network. Some people would even recognize me on the subway, and that felt pretty heady. All in all, over two years, I shot close to 600 half-hour shows. In 1999, the show was canceled and I was unceremoniously fired. That’s when I realized that this job was about TV – not food.

A lot of my motivation in my career, I realize now, was just to get work. It was that simple. When I discovered my passion for eating and cooking, it became about developing the competence and the skills to do something really well. There was also something public about it that, despite my shy nature, was sustaining to me – I loved and needed the praise and affirmation from my students, patrons, and reviewers. Still, even with the praise and achievements, I was really insecure throughout my career. I was often anxious at work and even when I had a dinner party, worrying that my cooking would not meet people’s expectations. I think I’ve come to feel proudest of my career as a chef only now.

After a long career in the kitchen, I finally made a break with the industry twelve years ago. Truthfully, I was burned out and happy to leave. I wanted a job that was enjoyable but not consuming. Believe it or not, I am now back where I started, working as a school librarian – and very happy.