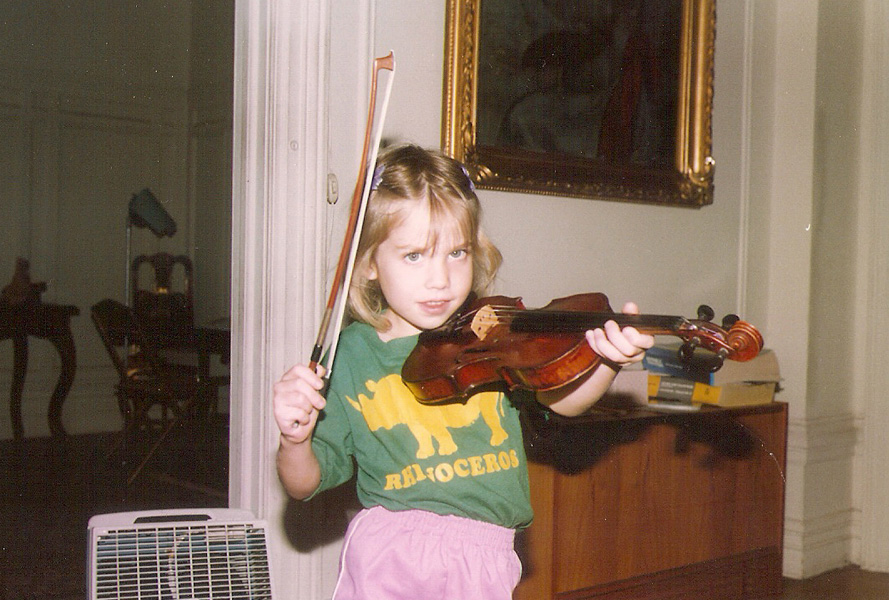 The chalkboard outside my local yoga-pilates-zumba studio reads, “‘You don’t have to be great to start, but you have to start, to be great.’ – Zig Ziglar.” It irks me every time I pass it. First, I want to erase the extra comma. Second, I hate that a catchy phrase, posted to sell glorified fitness classes (of which I have taken many, in search of flexibility and salvation), resonates and stabs me a little in my soul.

As a child, I wanted to be awesome at everything I did, right away. Inflating my unrealistic expectations was the tremendous ease with which so many early school milestones had come to me. Reading, writing, arithmetic—check, check, check. Watching classmates labor to grasp the same skills enforced a sense of difference and superiority and the belief that I should be able to conquer anything, first try. Teacher talk about hard work and different people having different strengths sounded like pap for the strugglers.

My first struggle to learn something came in kindergarten, when I began violin. Music has long been my family’s game. My father plays cello, as did his mother before him. My big brother, a piano prodigy, has perfect pitch and could play concertos from memory. Every weekend my father hosted chamber music, and string quartets swelled from the apartment while I played with toys in my bedroom.  Occasionally my brother joined the adult musicians, as both wunderkind and equal.

Stowed beneath the grand piano, our living room centerpiece, lay numerous classical instruments in their cases. Joining the fleet when I turned five was my aunt’s first violin. She had shipped the tiny instrument to me from California for my birthday, and with enthusiasm I prepared to enter the musical tribe.

The rituals of violin enchanted me: the gentle squeak of the case and its warm exhale, that scent somewhere between a church and a library; twisting the bow’s tip to tighten the horse hair; stroking it against the glowing amber block of rosin; coaxing melody from the strings. The violin could make me feel like royalty.

It also could make me feel like a klutz. The instrument, much smaller than the full-size ones my father’s friends played, still weighed more than I’d imagined. My chin learned to clamp it to my shoulder, where it protruded awkwardly. We strapped a rubber sponge to the chin rest to make it more comfortable, but a lesson or a practice session left me stiff.

Even worse, I wasn’t extraordinarily talented. I made my way through “Camptown Races” and other introductory songbook hits. Eventually I attained the level of real piece by real composer in a more challenging key signature. It included piano accompaniment, and my brother and I performed it together at our annual neighborhood recital. Initial pride gave way to shame. My brother had figured out his part instantly and was the real musician, while I was an impostor. He sounded like a pro; I sounded like just another kid.

Reinforcing my need to amaze was my family culture. At those music recitals, where young violin and piano students sawed and plinked their way through their best songs, my brother always went last. He dazzled with long pieces by historic composers, their old German names printed in the program next to his. I knew he was better than everyone else. His talent did not seem a marvel, but a given.

One year, a girl added vocal performance to the standard instrumental fare. Accompanying herself on piano, she belted out “The Wind Beneath My Wings,” with little caution and lots of volume.

After the recital, my brother commented on how terrible she sounded. I’m sure I joined in the critique. I remember my father’s wince, not at our unkindness, but at the memory of the girl’s screechy performance. Even my mild-mannered mother concurred: it had been pretty rough.

And suddenly I felt privately defensive of the girl and vowed never to embarrass myself like her. She had bowed with a grin, having dared to share something she loved. But my takeaway was that the biggest risks in life were imperfection and its resultant public humiliation.

At the end of first grade, I told my parents I wanted to quit violin. I felt fully formed at that point, after two years of lessons and six and a half years of living. If I wasn’t already great, I never would be, so what was the point?

My father seemed disappointed, but only gently asked why. I said I didn’t like violin anymore, that I wanted the time for other things. My mother said it was up to me, and they stuck by that. I put the instrument away in its case, under the piano, and never took a lesson again. 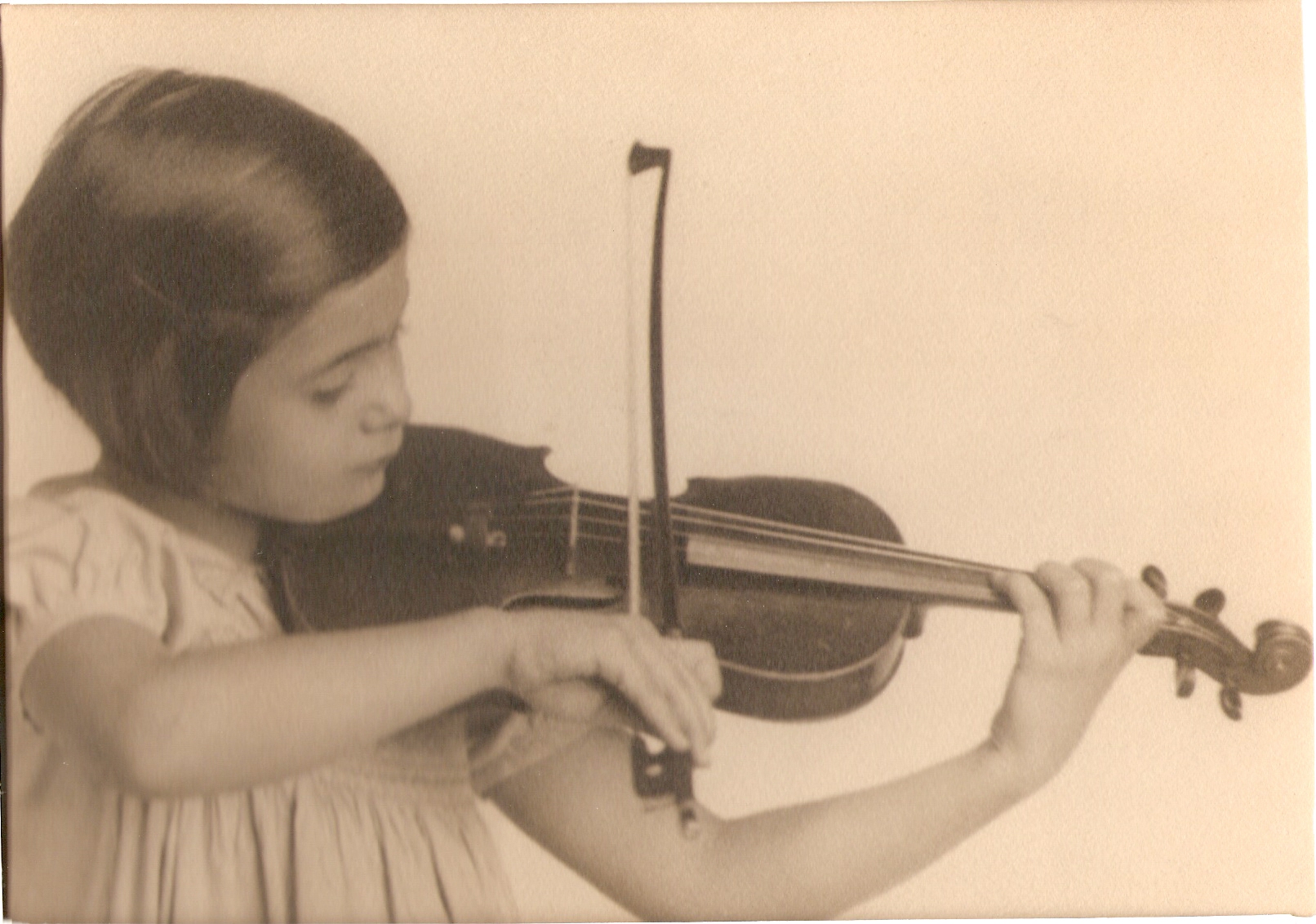 In middle school, I was accepted to the school choir, a boost to my musical self-esteem. I wanted again to be outstanding, but I also loved singing in a group, weaving my voice into the greater sound. The beauty of music nearly outweighed the need to feel extraordinary.

I loved it so much that I practiced choir pieces at home for fun. At our piano I began to figure out simple accompaniment, which expanded to more complex harmonies. Something compelled me to look through my brother’s old piano books, and I began to add his past music to my repertoire, piece by piece. It felt like an experiment: just how much could I learn?

A goal took root to master that tricky Chopin nocturne my brother had played years before. During private afternoons, with him still at school, my father at work, and my mother, the least judgmental family member, in the kitchen, I began to figure out the descending triples, the large intervals that stretched my hand span. I never would get it the way my brother did—without sheet music, experienced in his mind and lived in his fingers—but I had it, and it felt magical to play.

But that wasn’t enough. Now that I knew the piece, I would play and play and play, waiting for my father to acknowledge my hidden skill. Maybe I’m forgetting, but it would have been significant had it happened, so I think I have it right: he never said anything more than, “Sounds nice.”

Around high school I attempted again to find musical glory, and I asked my father if there was a violin available for me to use. He secured a loaner from his friend, and may even have asked if I wanted to take lessons again. I was not ready to embark on an official path toward improvement, to raise the stakes—because then I might fail. Just the violin would do.

In the privacy of my room, I tried out new pieces. My door stayed closed, but I was desperate for my father, the patriarch of music, to overhear and commend my success. I thought it might go something like this:

“My goodness, when did you learn that?”

“Do you remember that much violin from before? You only studied it for two years.”

“I guess it just came back to me.”

“Amazing. Let’s get you a teacher and some proper instruction. This talent simply can’t go to waste.”

Instead: time for dinner, put the violin in its case, report to the kitchen table.

Around that time, while tipsy at the house of a friend who had stuck with lessons long enough to make it to high school orchestra, I asked to try her violin.

“Oh my god,” she said over her beer. “You haven’t played since first grade? You’re like, really good.”

The relief was not as sweet as if it had come from my father, but sweet enough that I remember and blush to think of it. How badly I craved recognition, how badly I needed to feel excellent at something in order to feel justified in doing it.

I wish the conclusion of this story were that I have moved past this, that I do what I love, whether or not I’m instantly good at it. That today I play the violin even if no one is there to hear or approve of it.

I don’t. Without the gratification of feeling superb, the rediscovered charms of the instrument faded, and it went back in its case. If my family had verified my talent, perhaps that would have compelled me to continue. My own interest, however, was not enough.

The desire to be immediately fantastic, and the fear that if I’m not, I never will be, has plagued me—with the violin, and really, with everything that is difficult at first. A steady childhood diet of success and praise, violin aside, has made it hard to identify my motivations. What do I like to do because it makes me feel capable, and what would I like to do, even at the risk of mediocrity?

I know logically that at 31 I’m not yet fully formed, that I have permission to do things I don’t already display rare talent for. And yet, I still expect perfection from myself right away and stew over my mistakes. Self-flagellation is a bad habit that’s hard to break.

As a school teacher, I see students shift and grow all the time. I empathize with kids who remind of my younger self, who feel they’re fully formed, get As, and then the first time they don’t, assume their achievements were just a ride that has come to a halt. They hear me give the same talks my teachers gave about the value of work and struggle over initial success. Many of them probably think, “That’s not for me; that’s for the slow kids.”

Recently I sat down with a stellar student who blinked back tears as we went over her first B quiz. You’re just as wonderful a mathematical thinker as you’ve always been, I told her. She probably did not believe me, but she was too polite to disagree. Often we love what comes easily to us, but that’s not the only reason to love something or to do it. I don’t know how much she could see it then, but I know she will continue to grow, and achieve, and most importantly, find satisfaction in her efforts and in the life of her mind.

And I try to take my own advice, to trust that the same holds for me.

Sonny is a math teacher in New York.

Next week: when ideals collide with reality. Follow us so you don’t miss out: