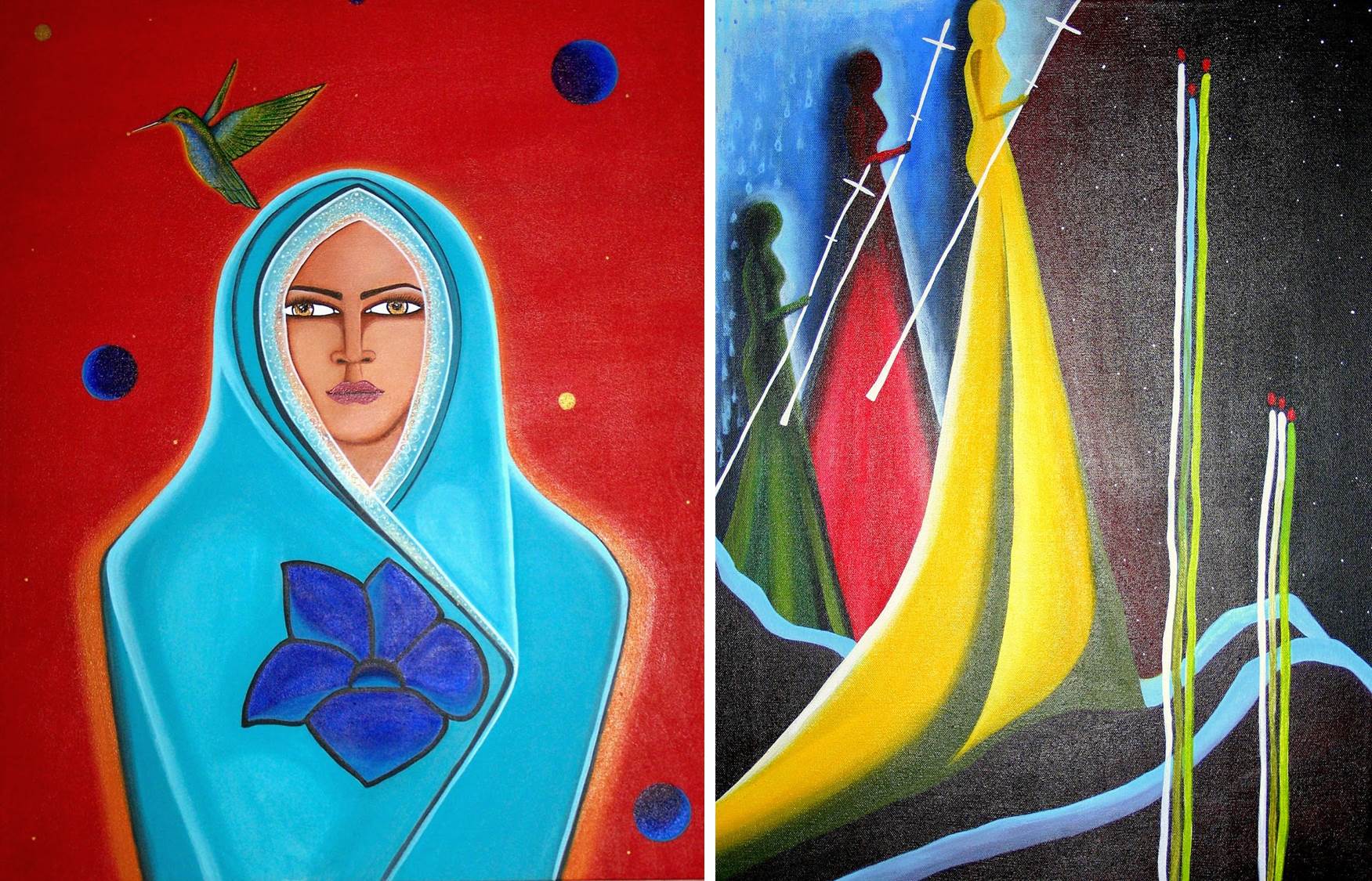 This week, we’re changing things up. To quote Ira Glass, we’re picking a theme and bringing you two stories on that theme. The theme: identity and place. What is it that shapes who we are? How much do we identify with where we are from? And what happens when we move and change places? We’re publishing one today (below), and one tomorrow for a special Tuesday edition of Small Answers.

To dive into this, we have two guest posters: Monica and Duyen. On the surface, these two are different as they come– Monica is 64, and moved to Arizona several years ago when she and her husband felt adrift within their own community. Duyen, is only 26, and has easily moved between Vietnam, California and New York, appropriating identity from each place. Yet the question, “where are you from?” is one she struggles with. Seemingly from disparate parts of the world, Monica and Duyen came together through love: Duyen is marrying Monica’s son and will soon be her daughter-in-law. Together, they decided to bring to light each of their struggles with the questions of who they are, what is meaningful about the place they live and how it has shaped each of them.

First we have Monica. Monica had a wonderful life with a satisfying career, a marriage, a son, and a house in a comfortable suburb of New York City. But after 9/11, things shifted for her. Despite everything looking fine on the outside, she felt adrift in her own community. To cope with their feelings of disconnection, she and her husband decided to make a huge move across the country – and found that it had implications far beyond their address.

—
Cardboard boxes at my feet, computers packed and cupboards clean. Like many risk-taking twenty-somethings, I was picking up my life in New York and moving it clear across the country to Tucson, Arizona. Only I was decades past twenty-something, I was 55 years old.

I grew up in the 1950s in Brooklyn, an earnest Italian-American who expected to encounter a life course aligned with a small circle of family and friends, wanting forever to shadow Grandma around the kitchen. I was certain my future was to be in happy homemaking, caring for many children and a content Italian-American husband. In the 1960s, I came smack against the era’s second wave of feminism. I quickly discovered the great multi-cultural diversity that existed beyond my loving – yet highly paternalistic – one-track familial background. By 1970, I was a very different person than the girl I began as. I left the ancestral acres and comfortable community doorsteps of my home to be part of a new world. At 36, I was a proper product of formula feminism who was trying to have it all. I had reached my generation’s quintessential quadruple quest (marriage, a son, a house, successful career). The social cohesion that shaped my life was a global corporate communications career, suburban school meetings and women’s professional networks. I had found the right balance of exhausting yet interconnecting circles and figured that would last for the rest of my life.

Then, in my fifth decade, where once I was able to reconcile all my worlds, something was not working. I found myself going off course, untethered to any circle. Certainly the experience of September 11 in New York City started the churning waters; all of our worlds at that time were coming apart at the seams. Instead of turning closer to community, I found myself uneasy in familiar surroundings, distracted by too homogeneous conversations, politics, work goals and demographics. Careers, for both my husband and I, although advancing dramatically in terms of professional level and financial compensation, were becoming less and less satisfying, too much a part of corporate machines fueled by mergers and public stock offerings.

My husband and I decided to turn the page and build a new life from scratch. We were seeking renewal the hard way by starting over completely in a very unfamiliar town.

What were we thinking?

Although I’ve straddled ever-changing social dynamics most of my life, the jump to Tucson, Arizona is the first move where a strong feeling about the land and my relationship to it is fulfilling expectations of connection, culture, career, identity, and place. In our small Sonoran desert city abutting the large Tohono O’odham Nation, this sense of place I’m building is called “himdag,” or way of life. The O’odham demonstration of the himdag, more focused on respect for nature, elders and traditions over fast-track materialistic lifestyles, led me to think more critically of my own. And from this pondering, amazingly, new career connections emerged. Seeking himdag for myself, I was given a reinvented consulting career involving the arts’ impact on economies, cultural immersion and folklife, in what many consider retirement years.

It only took six decades of great self-expectation and preconceived lifeway imperatives to establish this affinity! As I scan my history I see that community has always been a process of found, lost and renewed quest to get it back. I’ve learned three keys to place-making:

Tolerate discomfort in the search for community

Tucson was as unlikely a place as my husband and I could have imagined, because of Arizona politics. We were at land’s end, adrift in an odd sea, at first. But then, the move turned out to be a rewarding transition, and a richly developmental one. It gave us the independence to invigorate our lives on a new track, literally bumping shoulders with new cultures. It wasn’t courage that took curious hold over us, and transplanted two comfortable NYC souls to a somewhat inhospitable desert. Tucson always seemed like a world very far out of reach of my destiny. Yet here we are. Ranch, native American and desert life are no longer voyeuristic, but actually part of me, enlightening me in ways that enhance but do not overshadow my origin.

Reinvention can recharge you, and a career

Even as I reach 65, I am continually clarifying and shaping a life that is keenly suited to this strange geographic milieu in which I now live. I am going somewhere, that’s for sure, no longer striving solely for the materialistic goals, but for a future interconnected with meaning from our past. Working in folk arts, I am able to see the benefits that can be reclaimed from tribal heritage, whether the tribe European or Native American or even a lowrider community. As the world grows smaller in the scale of digital Internet reach, it also grows larger in the scope of culture, as long as we listen for and see these opportunities. This, I see, is what Proust meant when he wrote, “the true voyage of discovery consists not in seeking new landscapes, but in having new eyes.”

Community is a process

Rosabeth Moss Kanter says that all successful cities need magnets (things that draw visitors) and glue (things that retain community). The glue forms the places where community happens – it’s all a process of living, of meaning, of relationships, of rituals that give value, of respecting nature and creating spaces of beauty, and of maintaining a diversity which also equals street vitality.  Don’t get rid of glue. Right now I like Tucson’s glue; it allows me to touch the earth, instead of watching it pass by from a skyscraper window.

It’s nearing sunset and I am reminded of the Malagasy proverb: “All who live under the sky are woven together.” Tonight, as most nights, with sandaled feet pointed to the Catalina Mountains, my husband and I walk silently with our standard poodle, named Brooklyn, each tuning senses to sunset’s coming, and to its sounds and scents that help us feel at home. There’s the unique bird call; a fragrance emerging from a flowering bush; a javelina family digging up supper, getting ready to return to its bed by the dry wash.

Changing career and community is bound to be complicated. Please note this was not an escape: Instead of seeking a nostalgic, idyllic alternative to a complicated present, we were looking for more genuine, responsible dedication to a new level of social cohesion. How grateful I am to have discovered communities such as the O’odham, where people living simply had a very strong sense of themselves, profoundly connected to their land, keeping many aspects of culture private yet making their way in a modern world. In this new place, individuals are part of something greater than themselves, where people and nature share the same spiritual essence, where there are timeless bonds so contrasting to modern disconnections! This much is true: There is no “one-size-fits-all” sense of place. I suspect there are many new journeys ahead for me. Wherever my roots are planted, though, I hope they will be as satisfying and as deep as this desert’s magnificent sunsets.

Monica is a former vice president of the nonprofit Keep America Beautiful and international corporate communications manager for United Parcel Service and now now lives in Tucson, AZ. She writes about community placemaking, culture and business. Read more about her work at TucsonCowgirl.com or follow her on Twitter.

Images: Allison Francisco is a visual artist and member of the Tohono O’odham Nation.