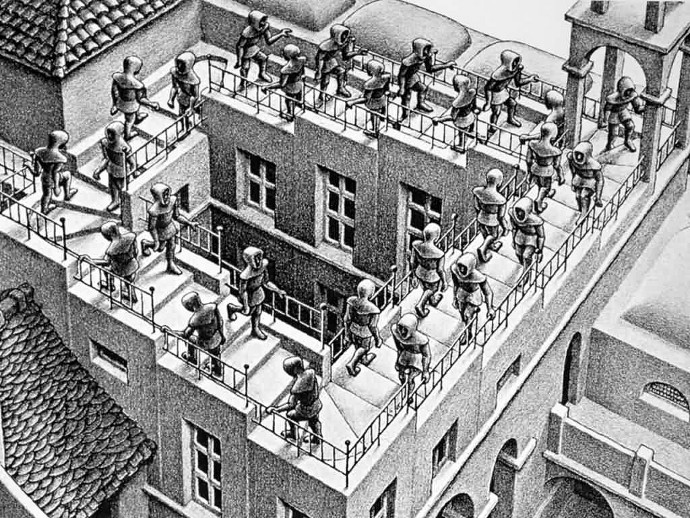 Whenever I’ve thought seriously about changing jobs, it has always been a reaction to a problem – a boss I didn’t like, underwhelming responsibilities, or just non-specific dissatisfaction. This is the normal way. But is it the best first response? Sometimes, making a switch is the right choice and does make us happier. Other times, switching jobs doesn’t solve anything, because we haven’t acknowledged our own habitual patterns or recognized the small things we can do to improve our job satisfaction. Without realizing it, we carry the problem with us wherever we go.

It could be any number of things: expectations that no job could possibly meet (or that we don’t even realize we have), a conviction that we are not smart or accomplished enough, a feeling of being owed, powerless, or victimized, or invisible scripts about what “ought” to come next. I notice these fallacies all the time in myself. There are aspects of all jobs that are immutable, things that may have a huge impact on our day to day experience and over which we have little influence, but I have been surprised by how much changing small things that are in my control has led to big leaps in my satisfaction at work.

At my first job out of college, I was an assistant to the chief operating officer of a publishing company, an avuncular man named Walter. The challenge with working for Walter, though I liked him very much, was that he didn’t have enough for me to do, and because he was in meetings much of the day, I wasn’t learning all that much from simply being around him. Compounding this was a personal tendency that I have to hold back and assume I have less to offer than everyone else. As a result, I spent much of my first six months trying to look busy, but not feeling that I had a place where I was contributing anything significant. I felt more and more aimless, and less and less valuable. I figured this was just what working was going to feel like for me. I certainly didn’t consider doing things differently.

The marketing manager at the company, a woman named Kathy, worked near me. Like many people who are good at their jobs, Kathy always had more to do than she had time for. Her projects revolved around creative ways to present and promote the books we published, and one day when she seemed particularly stressed out, I offered to help her. I like creative projects, and I worked hard to do a good job for her. She was grateful for the assistance, and I was relieved to find I could be useful. I also realized how much I enjoyed the type of work she did, and decided to informally apprentice myself to her as much as she would allow. Kathy noticed my enthusiasm and ability to help her and started to give me more and more work. Pretty soon I was working nearly as much for Kathy as I was for Walter. I learned a tremendous amount from her, and as I did I felt more and more capable and aware of the value I provided. After another six months, I was officially promoted into Kathy’s department. I hadn’t been hired with any expertise in marketing books; a combination of circumstance and interest led to to learn and pursue the opportunity to get relevant experience. (Cal Newport has a very helpful take on this – In Choosing a Job: Don’t Ask “What Are You Good At?”, Ask Instead “What Are You Willing to Get Good At?” – that I only read much later.)

Steph is a great example of another way of addressing a problem from within – in her case, it had to do with hidden expectations. She entered her current position envisioning specific outcomes and responsibilities. When the job didn’t meet her (mostly unconscious) assumptions, it was frustrating; she struggled to feel effective and impactful. After a year of trying new things, expanding the parts of the job she does like and thinking about the ones she doesn’t, she realized that those initial expectations were at the root of many of the challenges of the job. True, it had not met her pre-existing expectations, but it turned out that it actually offered her plenty of other things (like more free time) that she found incredibly valuable and made her very happy. I don’t want to gloss over the challenge of giving up expectations – that’s a complicated and challenging topic worthy of several posts – but as she started to do it, she felt more satisfied at work and was able to appreciate the benefits the job actually offered her rather than the ones she thought it would.

The behaviors and changes that I’m talking about are interior; they don’t observe the boundaries of a specific job. These are the slipperiest kind to make. They require constant work. Progress is uncertain; we inevitably trip ourselves up. Yet interior change, however fitful, endures where external circumstances do not. In Pema Chodron’s “How to Meditate,” she talks about an analogy from the Bodhisattva that says: if you walk on the earth and it’s hurting your feet, one solution is to cover all the earth with hides of leather. But where would one get enough leather, and how would you complete all the work it required? By simply wrapping a bit of leather around your feet, it’s as if the whole world were covered – you take your protection with you wherever you go.

That’s a way of saying that you could endlessly try to have suffering cease by dealing with outer circumstances, and that’s usually what all of us do, it’s… the usual approach, you just try to solve the outer problem again and again and again. And the Buddha said something quite revolutionary, actually, which I feel most of us don’t really buy. And that is, that if you work with your mind, that will eliminate all the suffering that seems to come from the outside… When something is bothering you, a person is bugging you, a situation is irritating you, or physical pain is bothering you, work with your mind and test this theory, or this teaching…if we work with our mind, that’s also the only place where we will begin to feel happy and contented with the world we live in.

When something at work is bothering us, we usually assume that we need to change our circumstances. We need a new job, promotion, or project. Sometimes, we get needed momentum from such a change, but often we end up experiencing a version of the same challenge in a different disguise. If we take the advice to work with our minds, and start changing from within, we do a better job understanding ourselves and can pinpoint what we need and decide how to get it. The solution may not be trying something new, it may be trying something old in a new way.

In 1886, novelist Anton Chekhov sent a letter to his 28 year old brother, Nikolai, an alcoholic who was struggling and aimless, in an attempt to persuade him to get his life together. He wrote, “You often complain to me that people “don’t understand” you. But even Goethe and Newton made no such complaints. Christ did, true, but he was talking about his doctrine, not his ego. People understand you all too well. If you don’t understand yourself, then it’s nobody else’s fault.” (Read the full letter here.)

All jobs have frustrations, and everyone struggles with unhappiness and dissatisfaction at times. It’s tempting to just move on to a new job when faced with these challenges. While sometimes that will be the best solution, we won’t fix much if we simply switch situations without having done the harder work of first figuring out ourselves within them. Once we do that, making small changes in the areas where we do have control can lead to lasting changes, wherever we decide to go.