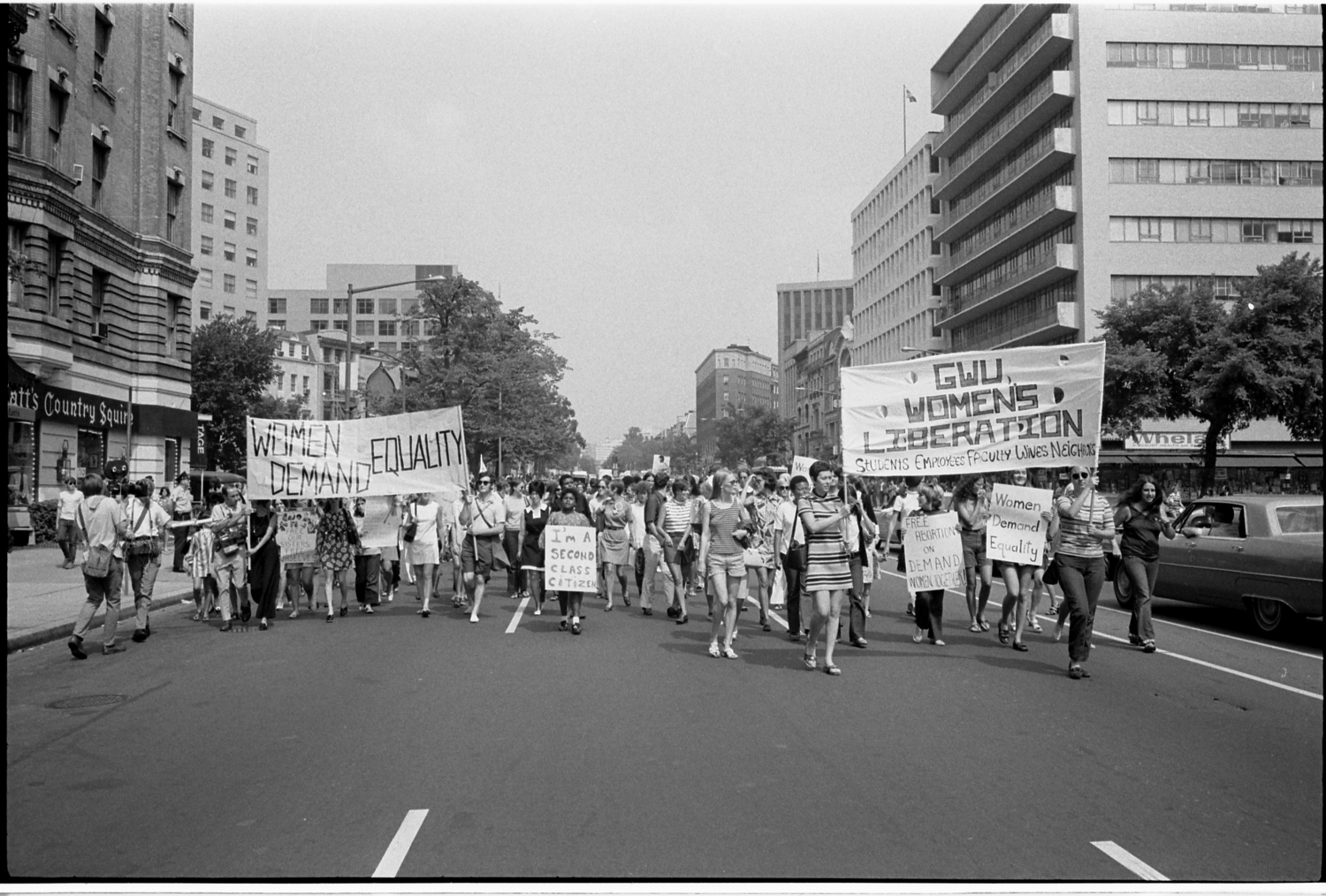 Image of a women’s liberation protest by Warren K. Leffler

I was at the heart of the second wave feminist uprising when I moved to Manhattan in 1969 at the age of 22. The help wanted ads in the newspaper were still divided into men’s jobs and women’s jobs (hard to imagine now), but women who had made the coffee and bore the babies for the rabble-rousing men of the Free Speech and Civil Rights movements were beginning to get restive.  What about our issues?

The male revolutionaries didn’t care about our issues, but they HAD taught us to organize, so we pressed for equality ourselves.  It was a heady time. Gloria Steinem was constantly in the news and Betty Friedan’s “The Second Sex” was being read widely.  We held consciousness-raising sessions in living rooms in Greenwich Village and eventually in larger spaces like churches and synagogues.  We marched for equal pay for equal work, for the right to safe and legal abortions, for equal opportunities to advance in business and the professions, and for the Equal Rights Amendment which would enshrine our status as the equals of men before the law in the Constitution.

As Gail Collins describes so well in “When Everything Changed,” the personal became political.  The fact that women are people too became a rallying cry.  As Susan Brownmiller wrote in her history of the movement, “In Our Time”, it almost seemed too easy at first.  Women marched and occupied the business offices of big publishing and advertising companies, and the management folded right away, promising to revise their policies.  There were several significant victories. Many states passed laws legalizing abortion before Roe v. Wade was decided, and many companies announced changes in their hiring and compensation practices.  The Civil Rights Act of 1964 had included women as a protected class.  Title Seven of the Civil Rights Act forbade gender discrimination in employment.

But pendulums swing, and the reactionary conservative right began its battles to “retake” the country from the revolutionaries.  Ronald Reagan was elected President and the first shots of what we now think of as the “culture wars” were fired across the bow.  The conservatives trained their sights on the women’s movement too.  We were denigrated as ugly, hairy, and bra-less nags who had completely lost our sense of humor.  In other words, we were trivialized and dismissed as women who probably couldn’t get a man.  Among our ranks were lesbians who rightly wanted to pursue gay rights issues.  But that gave the conservatives a target.  We were all lesbians, then, who did not care about “American families.” 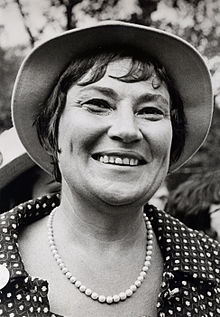 Bella Abzug was a major leader of the women’s lib movement. Image courtesy of the Library of Congress.

A very serious blow was the appearance of Phyllis Schlafly as the avatar of anti-women’s rights sentiment.  A working woman who derided working women, Schlafly opposed the Equal Rights Amendment — which had easily passed in the Congress in 1972, but was struggling for ratification by the states.  She used fear expertly to upset regular folks about unisex bathrooms, women getting drafted, imagined attacks on the hallowed “American family”, and the general loss of “femininity” that people began to equate with the women’s movement.  There was a lot of disinformation about how children would be harmed when mothers worked, based on no data whatsoever.

The movement sadly fractured as well. Those of us who wanted the next frontier to be banning pornography and stopping the objectification and commodification of women’s bodies in advertising ran up against serious dissension in our ranks.  Some women were sex workers, or liked pornography, or started to worry that “feminists” were going to ban “looking nice” or wearing lipstick or high heels.  We also sadly split along working/nonworking mother lines.  It was all too easy for reactionary detractors and the media to focus on the “mommy wars.”  The original idea of giving women an opportunity to choose to work somehow morphed into a fight between women who stayed home to raise children and women who did not.  It played into the patriarchy’s generalized fear of  empowered women, and left us little room to find common ground among ourselves.   Feminists were somehow portrayed as “hating” traditional women along with hating men.  It was a debacle..

One result of all this was that women in the generation after ours, sometimes called Gen Y, disengaged from the messy movement, often declaring victory had been won.  I can’t blame them for claiming the ground that we’d fought so hard to win in order to advance in their careers, but it rankled that they gave us so little credit for breaking their glass ceilings.  “I’m not really a feminist,” many would say while moving into worlds that had been off-limits only a few decades before.  “I got my job on my own merits,” was a common comment from women in the 1980’s and 1990’s, in explaining why they didn’t “need” to be feminists. Infuriatingly, instead of staying on message, many women got sidetracked into arguing about whether they could “have it all.”

While we argued among ourselves and dissipated our revolutionary energy, women’s rights were being nibbled away.  The issues we now see back in the news — birth control, abortion access — are there because small and relentless conservative gains have emboldened our opponents.  Those Gen Y women are now in their 40’s and early 50’s and are rethinking their blithe assumptions that the battles have been won.  Unbelievably (to me), birth control is a battle ground again, most recently when the Supreme Court in the “Hobby Lobby” decision found that a closely-held company whose owners are religiously opposed can opt out of providing birth control coverage under the Affordable Care Act. Abortion providers have suffered attacks and even been murdered.  Progressively more onerous restrictions on abortion clinics make it well-nigh impossible for poor women to access their constitutional rights to safe, legal abortion in many states.

The movement has disintegrated so thoroughly that there are precious few self-identified feminists in the Millennial Generation.  This is scary. I am both glad and frustrated that they take women’s gains for granted.  We should be able to by now, but thirty years of anti-feminist, anti-abortion rhetoric has taken its toll. It’s been so long since the horrors of botched back alley abortions, and the many women who need to have abortions have been so vilified, that these young women don’t want to call themselves “pro-choice.” I think the reactionary right has succeeded in equating “pro-choice” with “pro-abortion.”

It is even worse for the term “feminism.”  The 22-year-old actress Shailene Woodley was recently asked whether she was a feminist. Her reply: “No, I LOVE men.”  And there is a group calling itself Women Against Feminism.  What is up with that?  First wave feminism was about getting the right to vote and own property and other basic human rights we hardly remember we had to fight for.  Second wave feminism was about equal opportunity for women, which translates on the ground into guaranteed affordable child care, adequate health care, and acceptance of the principles of work-life balance for both working women and working men in the world of business and the public sphere.

What we need right now is the Equal Rights Amendment.  The battle for women’s full equality with men and participation in the public and business spheres will require a Constitutional back stop.   When push comes to shove, an Equal Rights Amendment would answer the question, “How important are women’s rights?” A constitutional guarantee that women are indeed people too is a wonderfully powerful answer.

Evan is an appellate lawyer working in San Francisco. She previously wrote about an abortion she didn’t regret.